How To Streamline Contract Review For Sales and Legal Teams

Closing a sales deal with a client is rarely an open and shut case. You may think that the back and forth communication makes the most sense via email. But after digging through endless chains of correspondence, not to mention outright missing vital messages, it’s obvious that this system is not efficient.

The steps in between obtaining a lead and signing a contract are numerous, and they require multiple people in different roles to play a part. One of the most crucial parts of closing a sales deal is legal review. There can be an inordinate amount of back and forth when reviewing contracts. Members of the sales, legal, and security teams are all involved.

With the amount of documents, communication, and logistics involved in this process, traditional tools like email simply don’t cut it.

Getting A Scalable Perspective

Sample Sales and Legal board here.

Kristen Habacht, VP of Sales at Trello, turned the contract review process into a Trello board. There was a time when it was just her and Trello’s General Counsel Brian Schmidt, going back and forth via email. But as the contracts began to file in at a faster rate, she realized that all of the steps, correspondence, and document management would be easier to see in a Trello board.

These days Kristen manages a team of ten, and Brian has multiple people under him reviewing contracts and completing security audits. They’re still using the same board, but it has grown and scaled to fit the needs of the expanding team.

“I originally made the board so I could understand whether [Counsel] had a chance to review a contract I had sent over. And then as the team came in, we made a process where they could funnel through this board instead of always going through me,” Kristen explains.

"If you were trying to get this all done by email, you would never have the whole picture because communications would be siloed between individuals, not shared across teams. Nobody would be able to get visibility into what the teams were working on. It would be a mess,"

The process is working. The board means that Kristen and Brian can get the overview they need as managers, but they also don’t need to be involved on a granular level in the communication of the status on every single deal.

Members of the sales team create a card in the “Incoming - Legal Review” list and add themselves as well as members of the legal team to the card. Everyone that needs to be up-to-date on the progress of the deal receives notifications when something changes on the deal card.

Legal and security documents are placed on the card back using Trello’s latest integration with Google Drive, allowing the team to have all the latest documents at their fingertips without any additional work. 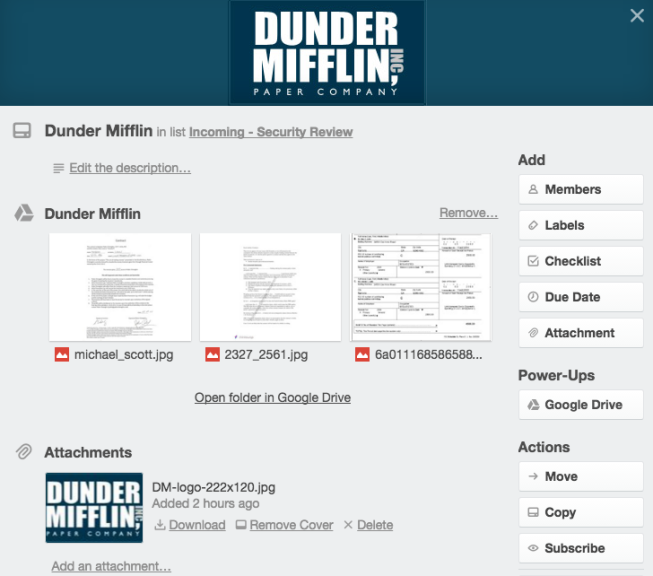 View all necessary documents for closing a deal in one place. The Google Drive Power-Up shows a preview of the document, when it was last edited, and by whom.

Cards are added to the bottom of the list in a queue format. Depending on the urgency of the deal, an incoming card could be given higher priority by being dragged up the list. The order of cards on the list is an indication of where in the process any given deal is in the pipeline, which helps the account executives set better expectations for when a deal will get done.

“Instead of bombarding legal with a lot of emails, or bothering them while they are in the middle of a contract review, we have visibility into everything they are working on for us, ” explains Alexa Battista, Strategic Account Executive.

Drag and drop cards in order of urgency to show what needs to be prioritized.

Once review starts on a particular deal, the legal team can use due dates to signal to account executives when they expect review to complete - another way for the teams to coordinate communications between each other and with customers.

“It’s no longer a black hole for the sales team, who want to know where their contracts are in the process.” Kristen says.

Managers Know What Their Team Is Doing

Brian and Kristen both subscribe to the entire board to receive notifications even when they aren’t added to individual cards. This higher level view is essential and gives them perspective on deal closing efforts across their teams, without requiring them to constantly reach out to different individuals for updates.

“As a manager, the ability to be subscribed to the board is really useful. Those notifications mean I know what’s happening with all the deals,” explains Brian.

So when one of the lawyers or security auditors working under Brian is assigned to a particular contract, he can see where they are and what they’re doing without having to dig into all the contractual grunt work himself. 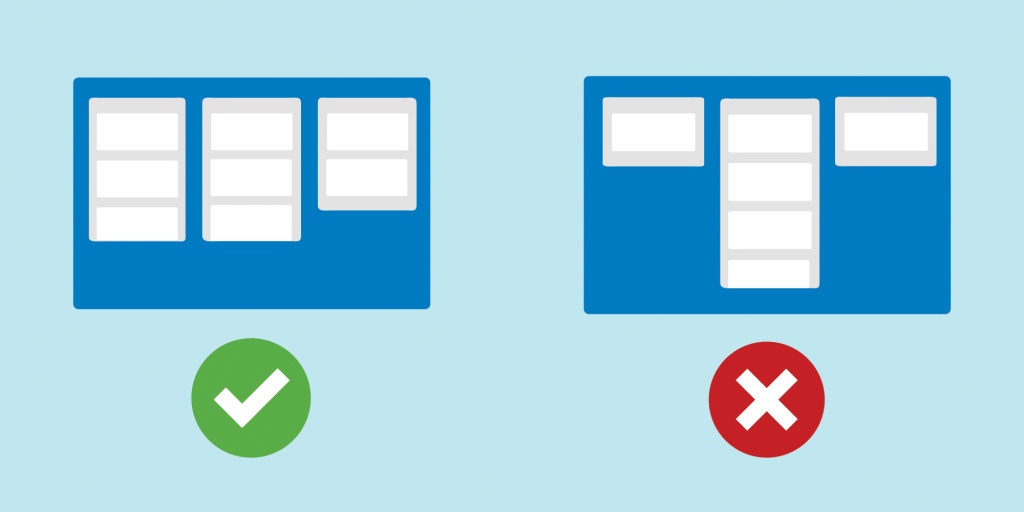 With a quick glance at a board, managers are able to see whether the pipeline is healthy (left) or if there is a backlog, and where (right).

This process is particularly important for load balancing. A visual overview is the best way to know where negotiations are stuck.

This method of internal communication has been invaluable for cross team communication between Sales and Legal. Kristen and her team utilize Salesforce to manage correspondence with the client externally while keeping the legal back and forth on an internal Trello board. This flow streamlines the process and means everything is clear.

"If you were trying to get this all done by email, you would never have the whole picture because communications would be siloed between individuals, not shared across teams. Nobody would be able to get visibility into what the teams were working on. It would be a mess," Brian says.

Consider it a done deal.

4 Business Data Security Risks That Could Cost You Millions

Learn which data security risks could cost profit, valuable IT resources, and a tarnished reputation. Read this to help your IT team lock it down.

The Trello resource management tools and features you need now

When there's a big undertaking ahead of you, but only finite resources, how can you manage the resources you do have?

Writing The Book On Marketing And Collaboration: One Novelist Tells All On Trello Views

How a novelist uses Trello Views to research, manage her writing career, and so much more!

Learn about cyber security training for hybrid and remote teams. Get tips to organize and schedule learning, and how to store and share security resources.