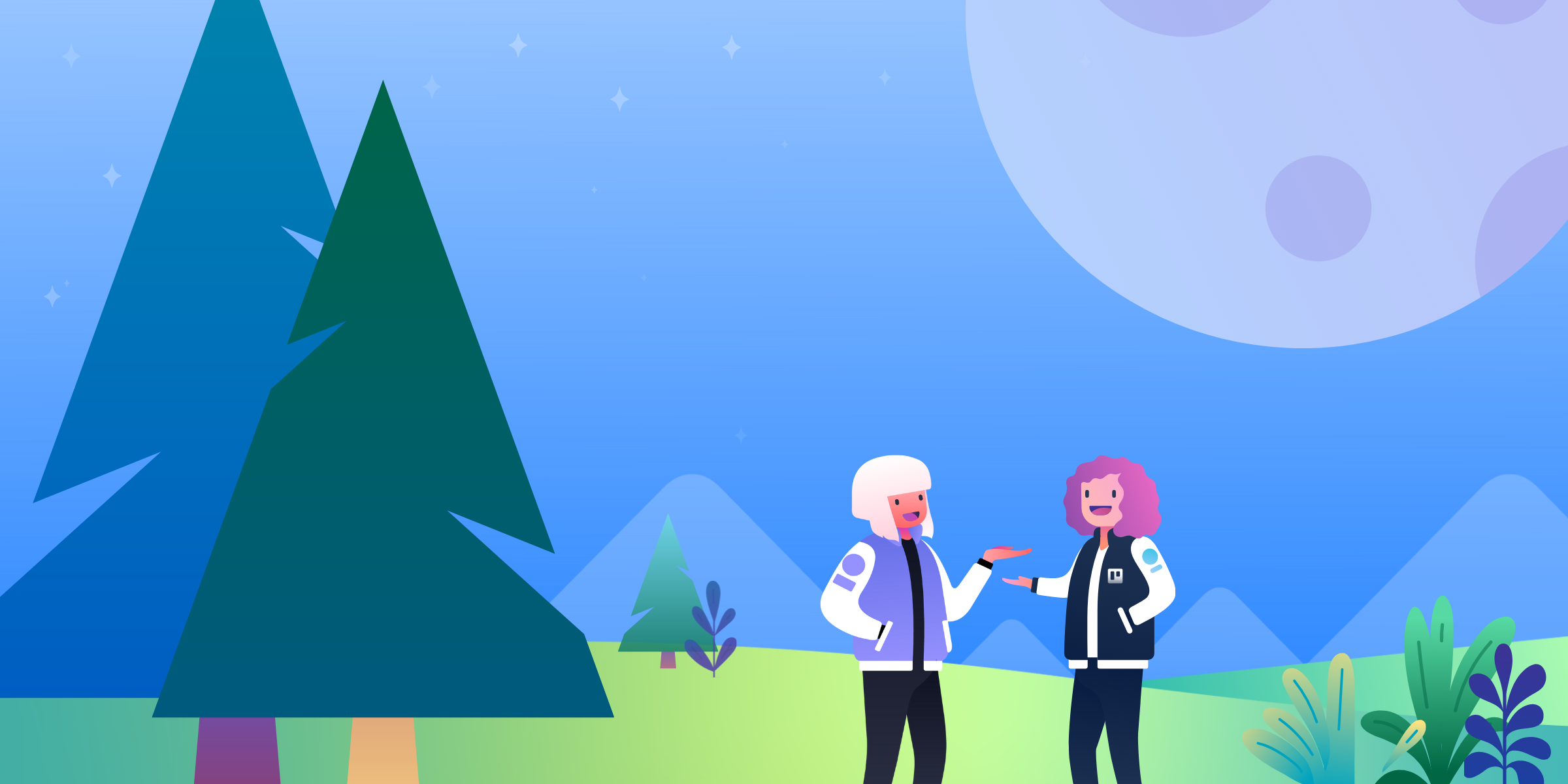 4,850 years old, the age of the oldest living tree. This is significantly older than the oldest human, all modern organizations, and more than double the Pandya Dynasty (generally considered the longest lasting human empire).

All this to say, trees (and subsequently the forests they overwhelmingly inhabit) have truly stood the test of time. Few, if any, living things can confidently best this tremendous knack for surviving and thriving in a chaotic and changing world.

So, what are the secrets? What worldly wisdom lies buried in the leaves, branches, trunks, roots, fungi, microbes, and everything else across the world’s forests? How have they triumphed for so long, and in the face of such volatility?

The answer, according to German forester Peter Wohlleben, is multifaceted—but steeped in cooperation. His book, The Hidden Life of Trees, gives us a remarkable look into these incredibly resilient and ever-adapting ecosystems.

Inspired by this work, I’m here to share what I’ve learned about teamwork, collaboration, and working together to achieve big things within a large, complex system.

What may seem like a static, unmoving being is actually quite the social butterfly. Between beneficial relationships with some insects, other trees, mammals, microbes, and even fungi, it’s safe to say the average tree has more friends than me.

Lovingly dubbed the “wood wide web,” these partnerships with fungi create a real win-win situation. The underground mycorrhizal networks formed by the fungi’s mycelium create a vast system where trees can pass water, nutrients, and various signals between each other. And for their help and trouble, the fungi get to skim the resources they need along the way. Win-win.

Just like email isn’t the only way to send a message, these subterranean networks aren’t the only way trees talk. The other common tactic is to release compounds in the air, acting like an early warning system to other trees that trouble is around.

For example, when an herbivore turns a tree into a salad buffet, some species will start releasing bitter compounds—acting as both a deterrent to the immediate danger and as a warning for other trees to prepare themselves. This advanced warning gives the whole ecosystem a better chance at survival.

So what do a tree’s social habits have to do with your team’s work? Shipping something big that may affect others’ work? Have you uncovered a potential competitor risk? Noticed a problematic security incident? Communication, in these cases, can help keep everything on the rails.

So learn productive ways to share statuses, loop in the right teammates, and help avoid blindsiding someone else. These are generally referred to as siloes, and have a tendency to rear their heads and derail even the most organized projects.

Learn to break down these information silos to truly unlock cross-functional collaboration.

Takeaway: Take the time to communicate, and do it well. Your team/organization/company may very well depend on it.

2. No Tree Left Behind

Many may be surprised to find a stunning level of altruism in a forest, where they may otherwise expect individual trees to prioritize their own survival.

That’s not what Peter observed one day strolling through his forest, when he stumbled upon what looked like a patch of mossy stones:

"​​The stones were in an unusual shape: they were gently curved with hollowed-out areas. Carefully, I lifted the moss on one of the stones. What I found underneath was tree bark. So, these were not stones, after all, but old wood.

I took out my pocket knife and carefully scraped away some of the bark until I got down to a greenish layer. Green? This color is found only in chlorophyll, which makes new leaves green; reserves of chlorophyll are also stored in the trunks of living trees. That could mean only one thing: this piece of wood was still alive!"

-Peter Wohlleben, Author of The Hidden Life of Trees

This puzzled him, how was this seemingly dead tree still living? Further research eventually revealed the secret: Other trees were supporting this old, ancient stump (for hundreds of years, no less). But why?

While not true for every species, many trees are truly dependent on their ecosystem to survive. If too many trees die, the local microclimate begins to change (potentially for the worse). If too much of the upper canopy dies off, the sun’s piercing rays will dry and harm the forest floor (or a storm will get in and rip up even more trees—creating a destructive feedback loop).

While not universally true in the workplace (toxic coworkers do exist), overwhelmingly your teammates are an important part of realizing big picture success. And given we’re all humans, we all periodically suffer from tragedy, health woes, and so much more.

So when someone’s down, tap into your empathetic side and bring your team back up.

Takeaway: Complex systems rely on long chains to survive. Pick your teammates up when they’re down—you never know when you’ll need the same.

When winter approaches, many species (but not all) of trees don their PJs, climb into bed, and get their annual dose of shut-eye.

“Sleep deprivation affects trees and people in much the same way: It is life-threatening.”
-Peter Wohlleben

Trees have a sort of rhythm akin to a human’s circadian rhythm. They’re sensitive to things like light and temperature to understand their surroundings and provide critical information for their decision-making processes. Sleep deprivation stunts this for a tree, causing some to die prematurely.

This one doesn’t require much extrapolation: Sleep is crucial for humans. People perform significantly better when they’re well-rested, so don’t feel bad about prioritizing a good night’s sleep.

Taking this further, there’s more to rest and recharging than just sleep. Leverage these seven types of rest to bring your freshest self to work:

Takeaway: Sleep deprivation can be a tremendous strain on your productivity, so don’t forget to take care of yourself.

4. Take Care Of Your Surroundings

I won’t speak for everyone, but it’s safe to say it’s human nature to enjoy spending time in nature. Further, a simple walk through the forest has been shown to actually be good for us.

Researchers in Korea (from The Hidden Life of Trees) compared blood pressure, lung capacity, and artery elasticity in older women who took walks through forests vs urban areas. All three measures improved in a forest setting, while no changes were observed in an urban setting.

Now why may that be?

Further research discovered that natural compounds trees release in order to rid them of hostile pests and microbes have a very different effect on humans (spoiler alert: It’s positive). These phytoncides (that strong pine scent many of us are familiar with) neutralize threats in a tree’s immediate surroundings.

While it may be a stretch to say trees disinfect the air around them so humans can be happier and healthier, it appears to be a pleasant byproduct nonetheless. So how can we take this back to work? Quite simply, I think.

Focus on creating positive working experiences in your day-to-day work life. Not only do we all prefer working with someone who is a joy—vs difficult—it may just lead to some sweet productivity gains too.

Make sharing gratitude part of your culture. Help others feel better and you might unearth some pleasant surprises.

Takeaway: Be mindful of your surroundings and embrace the philosophy of leaving it as good or better than you found it. Also doubles as a great tip anytime you’re out in nature.

5. Trees Live On A Different Timescale

We know trees can live for a long time. An entire human lifespan equates, give or take, to being just a child for a tree. We obsess over weekly sprints and quarterly operating plans, which might as well be a yawn for a tree.

So what do we have to learn about this? Let’s do a fun exercise.

Think about your company 100 years from now. Many current day organizations won’t exist, but that’s by no means guaranteed. King Arthur Flour started on the east coast of the United States in 1790 and you can still buy their flour in stores today.

Lloyd’s of London began in 1686 and still operates today. Or HarperCollins, founded in 1817, is still publishing books in 2021.

So think about your work, and think about your team, on a timescale longer than you’re used to. What’s true now that will also be true in 100 years? Or even just 5? Do you still green light the same project if you can’t envision how it fits into a company’s five year vision?

No one should abandon their annual plan, but changing the horizon can give you a fresh perspective. (Here at Trello, we’re all about perspective!)

Here’s a short example to help explain the power of shifting your perspective (courtesy of the Farnam Street blog):

Imagine you are on a ship that has reached constant velocity (meaning without a change in speed or direction). You are below deck and there are no portholes. You drop a ball from your raised hand to the floor. To you, it looks as if the ball is dropping straight down, thereby confirming gravity is at work. You are able to perceive this vertical shift as the ball changed its location by about three feet.

Now imagine you are a fish (with special x-ray vision) and you are watching this ship go past. You see the scientist inside, dropping a ball. You register the vertical change in the position of the ball. But you are also able to see a horizontal change. As the ball was pulled down by gravity it also shifted its position east by about 20 feet. The ship moved through the water and therefore so did the ball. The scientist on board, with no external point of reference, was not able to perceive this horizontal shift.

Takeaway: Change the timescale you’re used to using and see your work with a fresh, new perspective.

As our world continually changes, taking a step back, slowing down, and learning a thing (or five) from some of the most enduring beings around is a worthwhile endeavor. To quote Henry David Thoreau, “Live in each season as it passes; breathe the air, drink the drink, taste the fruit, and resign yourself to the influence of the earth.”