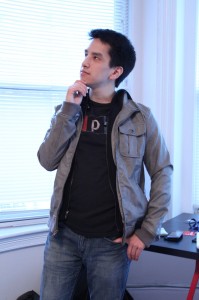 Daniel Lew, one of our Android developers was recently named a Google Developer Expert.  There are only 20 Android GDEs in the world and only 3 in the United States! So needless to say, we were extremely impressed. I took a moment to ask him a few questions about the honor.

What exactly is a Google Developer Expert?

I feel like the GDE page has a much better answer than I can give. From https://developers.google.com/experts/

“The Google Developer Experts (GDE) title recognizes the outstanding developers who exhibit great expertise in one or more Google technologies and share it with the developer community. GDEs are gurus, mentors and evangelists; they create tutorials, code samples, and write books and blogs; they publish videos, drive community projects, and present at events large and small. These independent developers bring their real-world experience and knowledge working with Google technologies to developer communities worldwide.”

How did you become a Google Developer Expert?

First, there's a nomination process. Some people from my local Google Developers Group (GDG) nominated me, which was flattering. Once nominated you compile a CV of your work with your Google technology specialization. This can include a wide variety of activities including software creation, community involvement and speaking engagements. Next, there are a couple of interviews - one with an existing GDE and one with a Googler. After I got approval from them I was in. The GDE tenure is only a year, though, so if I want to keep my GDE status I'll have to keep working at it. I can't just kick back and relax now!

What advice would you give to others who wanted to try to become GDEs?

Right now nominations are closed, but I'm sure that they'll reopen at some future date. In the meantime, it's important to learn your technology and share your knowledge. A GDE isn't just an expert coder; they also have to be actively involved in the community, online and in person.

What are the perks? Is it worth the effort?

I've only been a GDE for a short time, so I can't speak to many of its perks yet. There is one upcoming perk I'm looking forward to: invitations to the annual GDE summit and Google I/O. I look forward to both events because I like talking with passionate programmers who know a lot about their craft.

As for it being worth the effort, the actual application was fairly easy because I've had a long history with Android. All of the blogging, meetups and conferences I've done have been just for the fun of it so far and I would've done them either way, so I don't really consider them effort for the sake of being a GDE.

Stay Organized Where Work Is Located With Trello Map View

Make it easy to clearly organize locations and visualize that information on cards with the Map View in Trello.

Take productivity and collaboration to the next level right in the palm of your hand with dark mode and Butler automations for the Trello mobile apps.

Make logging in and out of multiple Trello accounts as easy as pie! Introducing the new Trello account switcher for our mobile, web, and desktop apps.

Trello’s visual boards, lists, and cards, plus enterprise-level security means agencies of all sizes can seamleassly join the digital workplace.