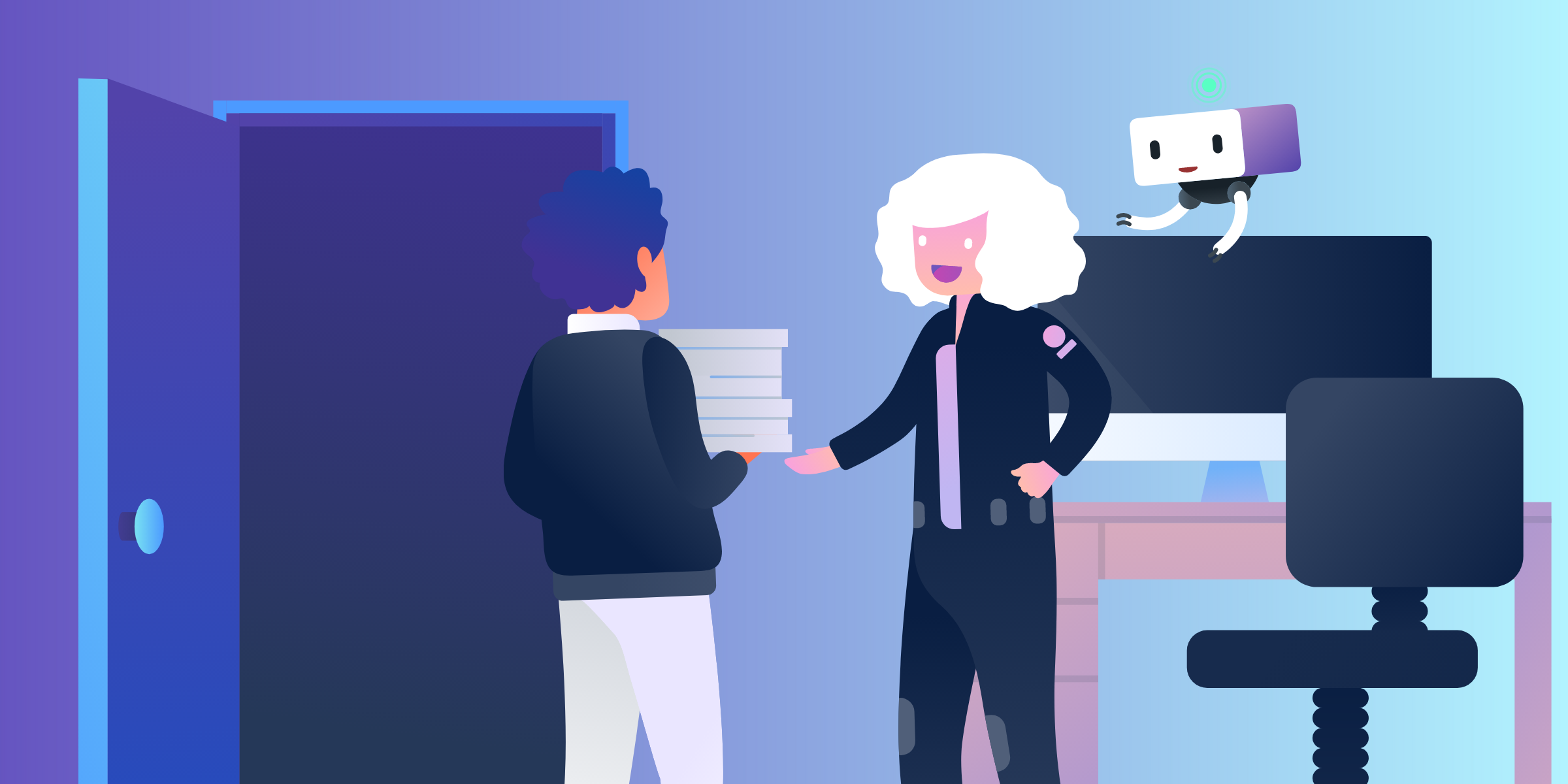 You recently promoted one of your best employees. You’re thrilled that you were able to recognize and reward their hard work with a well-deserved step up the ladder.

But you’ll be honest: There’s a tiny sliver of you that’s left thinking, “Ugh, now I’ve got a real mess to sort out.”

After all, they were one of your best employees for a reason—they contributed a lot. Now you’re left to figure out how to cover their responsibilities, fill that gaping hole in your team, and ensure a smooth transition of their tasks without the whole row of dominoes toppling over.

It’s a struggle, there’s no doubt about it. But, succession planning can make it at least a little bit easier.

What Exactly Is Succession Planning?

It’s a fancy and somewhat academic-sounding term, but here’s the gist: Succession planning is the process of identifying the key roles on your team and figuring out how you’ll fill them when they’re left vacant (whether that’s because of turnover, promotions, restructuring, or something else).

Think of it as future-proofing your team. Rather than staring slack-jawed at your org chart when one of your team’s managers moves to a director position, you’ll have at least a loose plan in place for how to move forward.

You barely know what’s going to happen tomorrow or next week, let alone in the next couple of years. That can make succession planning feel like you’re throwing a dart at a board with a blindfold on.

It’s true that there’s no way for you to know with certainty what the future holds. However, that’s all part of this planning process—identifying the options that are available to you, so that you’re prepared to roll with what comes your way. Here’s a simple step-by-step for how you can approach this (without a crystal ball).

Wait...we just said you weren’t a future-teller. That’s true. There will be unexpected vacancies on your team, whether that’s unanticipated medical leave or people moving into different roles with different companies.

But, there are aspects of the future that you can plan for—and career development is arguably the biggest one. What roles are currently on your team? What do you anticipate your team looking like a few years in the future? How do you think people will move through those roles?

Grab your current org chart if you have one or sketch it out on a sheet of paper if you need to. Then, map out how you think that will grow and evolve down the line—using your company’s overarching goals and conversations you’ve had with leadership as a guide.

It might seem like an oversimplified first step, but this visual is undeniably helpful for understanding how the individual pieces of your team fit together and feed each other. That’s something you’ll need a good grasp on as you move through the rest of the planning process.

2. Dive Into The Details Of Each Position

It’s hard to identify successors if you don’t have a solid handle on the ins and outs of each position on your team. While you might think you already understand what employees are up to each day, you’ll probably be surprised by how many tasks and responsibilities are flying under the radar.

For that reason, make sure that you’re using a portion of your one-on-one conversations with employees to touch base on what’s on their plate. That will give you a realistic understanding of what they’re actually tasked with—beyond what was listed in the initial job description.

You could even formalize this process a bit by making this a collaborative exercise with your team members. Provide them with a brief questionnaire or document that asks them to share:

Make it clear that this isn’t focused on replacing them right now (there’s no need to cause panic about job security), but that these reference guides will be a huge help as your team grows, you plan advancement paths, and you figure out how to keep things running smoothly.

When you’re left with an open position and uncovered responsibilities, there are a number of different ways you could fill that role gap. You could:

See? You aren’t at a total loss here—you have options. And, the previous step equipped you with the details of each role that you’d need to fill or cover, so you have a mold to figure out which routes are most feasible and the least disruptive.

You’ve determined where your team is headed, who currently does what, and what choices you have to fill role gaps. Now, all that’s left to do is figure out what your ideal plan looks like.

Let’s sketch this out with an example. You and your company leadership have already discussed the potential of adding the Head of Content role to your marketing team within the next year or so. Your current Content Marketing Manager has expressed interest in that promotion—and you know they’d be a great fit.

But, that upward movement leaves a key management role on your team (the Content Manager position) empty. What does that mean for the future and that opening? You might decide that you’ll:

Keep in mind that this plan might not be bulletproof when the time comes—things change. However, having this rough plan in place at least gives you a starting point when you need to address role gaps.

Hopefully you’re realizing that succession planning doesn’t need to be quite as daunting and complex as you originally thought. It’s a bit of a puzzle, but it’s nothing that you can’t figure out with a little time and scribbling.

Curious for how you can ensure even smoother transitions? Here are a few more best practices to have in your back pocket.

To make succession planning even more manageable—especially if you’re doing it for the very first time—avoid pressuring yourself into having firm next steps for every single role on your team.

Instead, start with roles that have oversight, such as leads, managers, and directors. Traditionally, succession planning is about identifying and developing replacements for leadership roles specifically.

Even if you do want to eventually have an idea of how you’d cover any position on your team, focusing on leaders is the best place to get the process started—especially since vacancies in those positions can cause the biggest disruptions on your team.

Sure, your ideal plan might be to eventually move your existing Content Marketing Manager into the Head of Content role. But, if they aren’t actually interested in taking that step up, that plan doesn’t do you any good.

That’s one of the many reasons it’s important to have regular and honest career development conversations with all of your employees—even with team members that don’t yet have a clear next step or path to advancement.

In your one-on-one meetings, make sure you’re asking questions like:

These prompts and candid conversations make employees feel heard, valued, and supported. They also give you useful information you can use to not only iron out succession plans, but ensure you have the right talent to stick with those plans. When 45% of managers say they lack confidence to help employees develop the skills they need, this direct insight is beneficial.

3. Shine The Spotlight On Documentation

Regardless of what role gap you need to plug on your team, making documentation a staple of your culture and processes will make everybody’s life so much easier.

81% of employees say that knowledge gained from hands-on experience is the hardest to replace when it’s lost. Plus, the same research found that inefficient knowledge sharing costs large businesses $47 million per year.

Documenting common processes does away with siloed information and creates a resource that people can turn to when responsibilities need to be either temporarily covered or permanently reallocated.

Similarly, using a collaborative work management platform (like Trello!) gives everybody the visibility and transparency they need to step in on projects and tasks—without a ton of digging and confusion.

Ride The Waves And Fill the Gaps

Effective succession planning gives you a roadmap that you can follow as your team grows and people move into different positions (whether that’s with your company or elsewhere). Going through the process allows you to feel far more prepared to address role gaps without a frantic scramble.

However, even if you plan everything as carefully as possible, that doesn’t mean it’ll always be smooth sailing.

Somebody who’s a crucial part of the plan might unexpectedly exit your company. Or your department might go through a reorganization. There will still be times when things slip through the cracks or you need to identify some less-than-perfect solutions just to make it through.

For that very reason, succession planning isn’t a one-and-done activity. You need to ride the waves and make adjustments as things change. Remember, as counterintuitive as it seems, the best plans are flexible plans.

Three steps to manage, motivate, and support an underperforming employee

Here’s the truth: Dealing with an underperforming employee can be challenging for everyone involved—here are some solutions for moving forward.