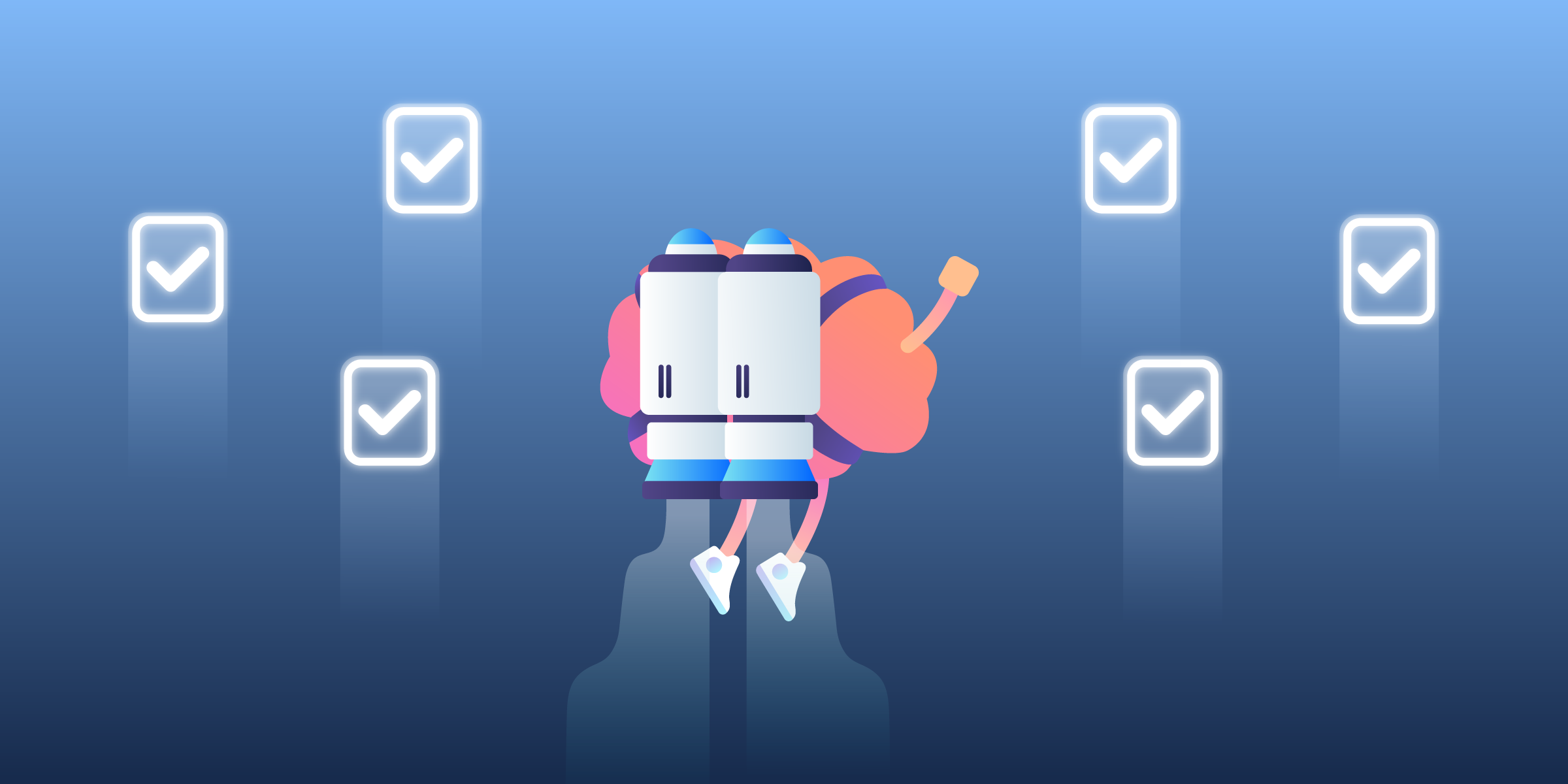 It’s the middle of the afternoon and your motivation is seriously lagging. Nevermind working your way through the lengthy to-do list that’s next to you—at this point, the thought of answering even a single email feels equivalent to running a marathon.

What do you do? If you’re like a lot of people (guilty as charged), you might just give into your unfocused mood and peruse YouTube or social media. Or, maybe you’ll just lay your head down on your desk and beg the productivity deities for a much-needed kick in the pants.

Well, peel your forehead off of your keyboard, because there’s a better way to boost your motivation. It all comes back to a little something called dopamine.

If you’ve heard of the neurotransmitter dopamine before, you’ve likely heard it explained in the context of pleasure. You were told that when you eat a delicious cupcake, for example, your dopamine levels surge and your mood improves.

But as it turns out, dopamine is more than just the feel-good neurotransmitter. It’s actually more closely related to motivation. Basically, it’s a brain chemical that doesn’t just respond to rewards—it encourages us to seek them.

Without digging into a complex neuroscience lesson, it works like this: Your brain learns what activities (like that tasty cupcake) lead to pleasurable feelings and releases dopamine to inspire you to act and obtain that reward once again. At that point, you’ll likely experience another spike in dopamine.

“Low levels of dopamine make people and other animals less likely to work for things, so it has more to do with motivation and cost/benefit analyses than pleasure itself,” explains John Salamone, a Professor of Psychology who has conducted a lot of research into dopamine.

So, saying that dopamine causes pleasure is an oversimplified view. Dopamine actually does the bulk of its work before you feel that satisfaction. It’s the motivation neurotransmitter.

That can obviously have major implications for your productivity. If you can hack your dopamine levels, then you can trick your brain into seeking a pleasurable experience (like crossing something off your to-do list) and leverage neuroscience to get more done.

How To Boost Your Own Motivation And Productivity

But now here’s the big question: How do you do that? Do you actually have any control over your own dopamine levels? Or is this all just behind-the-scenes brain magic?

Hey, you have more power than you think you do. Research proves that there are indeed certain things you can do to increase dopamine.

Let’s explore those studies and a few simple strategies (no brain surgery involved) that you can use to give yourself a healthy hit of this helpful neurotransmitter and crank your way through that daily to-do list.

1. Squeeze In Some Physical Activity

You assume that staying parked at your desk all day means you’ll get more done. But, if you’ve taken that approach before, you know that it often only leads to fuzzy eyes, a stiff back, and waning motivation levels.

When you’re feeling foggy, a better move is to incorporate some physical activity into your schedule. That’s because studies show that exercise can lead to an uptick in your dopamine levels.

Here’s the thing, though: A quick desk stretching session or a brief stroll to the coffee pot probably isn’t going to do much for you. Aerobic exercise is what boosts dopamine the best, so you need to do something that actually gets your heart rate up.

Whether that’s taking a half-hour break for a fast-paced walk outside or doing a series of jumping jacks in between meetings, break a little bit of a sweat. You might just be surprised by the level of motivation you feel when you sit down at your desk again.

Recall the last time your boss or a team member gave you a hearty, “Awesome work!” on a task you had recently wrapped up. Did you return to your desk feeling even more inclined to keep getting things done?

Yep, that’s no coincidence. Praise and recognition have been proven to give our motivation levels a boost. And, while there isn’t a ton of in-depth research into exactly why that is quite yet, experts assume that dopamine plays a critical role in that process.

“Recognition for good work releases dopamine in the brain, which creates feelings of pride and pleasure,” explains research from Gallup. “Better yet, that dopamine hit cements the knowledge that more of that behavior will create more praise, resulting in another dopamine drench, and so on.”

When we’re all conditioned to be humble (and maybe even self-deprecating), being vocal about your own accomplishments can feel a little braggy.

But, the next time you score a win—whether it’s making progress on that project or finally figuring out why that spreadsheet formula wasn’t working—go ahead and loop a team member or two in on what you got done. Even just a simple, “Wow, you’re killin’ it today!” from your coworker will help you stay committed to your remaining to-dos.

You’ve probably experienced that rush of satisfaction when you check something off of your task list. That, my friend, is a dopamine hit.

Remember, while those dopamine spikes occur when you achieve a reward, they’re doing the majority of their legwork ahead of time. When presented with the potential of a reward, your dopamine levels rise to push you toward it.

But, that means the further away a reward is, the more our motivation will wane. You’ve experienced this firsthand. It’s harder to muster up motivation to work on a project that you know won’t cross the finish line until a few months from now, because the gratification is so delayed.

Breaking your big projects into smaller milestones or actionable tasks is the best way to get more frequent dopamine spikes and actually make progress on those big, hairy assignments.

A micro-task feels way more attainable than a major project. So, the reward of crossing it off feels closer than the completion of the entire project. Your dopamine will kick things up a notch to check off that task. When you do, your dopamine will spike again in response to the reward of completing that to-do, which then powers you through the next task. And the snowball just keeps rolling from there.

4. Get A Good Night’s Sleep

It’s common knowledge that catching some high-quality zzz’s is good for you mentally, physically, and emotionally. But, let’s take a closer look at how a good night’s snooze impacts your dopamine levels.

Research has indicated that one sleepless night actually produces more dopamine (because your brain is releasing that neurotransmitter to try to compensate for your lack of sleep). However, while your dopamine production might be kicked into overdrive after that restless night, the researchers also concluded that the dopamine surge isn’t nearly enough to make up for the cognitive deficits related to sleep deprivation.

Even further, the same researcher found that lack of sleep inhibited dopamine transmission. Brain cells were able to release dopamine, but not receive it—meaning it did no good.

Depriving yourself of a much-needed snooze or pulling an all-nighter isn’t the best way to maximize your productivity. On the contrary, you should aim to get as much quality sleep as you can. After all, sleep can recharge your neurotransmitters, including dopamine.

5. Turn Up Your Favorite Playlist

Still struggling to focus on your to-do list? This final suggestion is a fun one: Grab your headphones and turn on some of your favorite tunes.

If you’ve previously noticed that music can boost your mood, you’ll be glad to hear that research actually backs up this phenomenon. One study found that listening to music you love causes your brain to release more dopamine.

“We cannot conclude that taking dopamine will increase your musical pleasure,” explains Laura Ferreri, an associate professor in cognitive psychology at Lyon University who authored the study. “What we can say is much more interesting: listening to the music you love will make your brain release more dopamine, a crucial neurotransmitter for humans’ emotional and cognitive functioning.”

Whether you love mellow instrumentals or head-bobbing to classic rock, this is your permission to turn it up (without disrupting your team members, of course). It might just be the secret to tackling your to-do list.

Got Dopamine? Make This Feel-Good Chemical Your Productivity Superpower

We’ve all hit those points when our motivation takes a serious nosedive. Those moments are frustrating, and often send us spinning into a string of unproductive behaviors—like wasting time on the internet or beating ourselves up over our perceived laziness.

Instead, turn to neuroscience to give yourself a swift kick in the pants. The above are just a few of the ways that you can give yourself healthy dopamine hits, power through your tasks, and end your day feeling awesome.

Next: Are You A Learner Or Performer? How To Excel Based On Your Mindset Type