How To Just Ship: An Interview With Amy Hoy 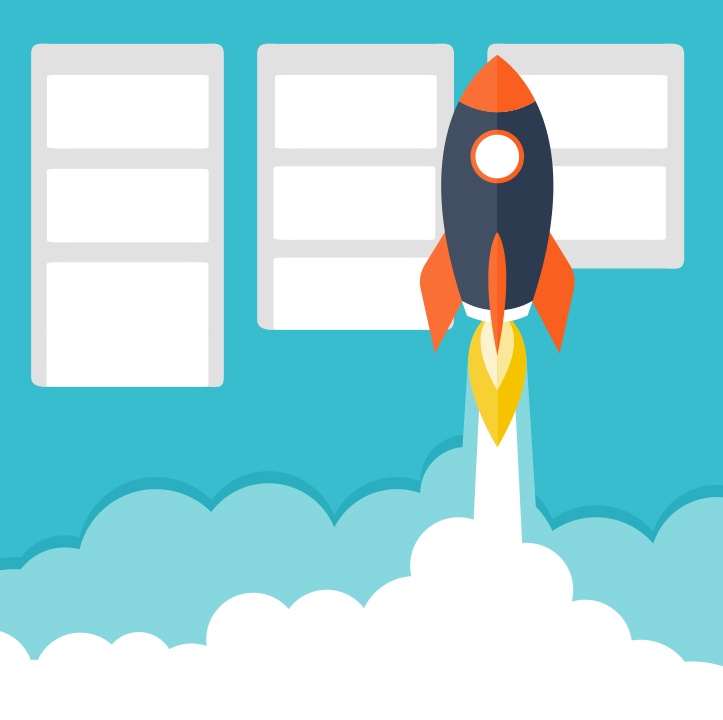 JFS is an ebook that makes food related analogies on how to escape the constant rut of A/B testing landing pages.

Allow me to propose this hypothetical scenario: You’re a creator. Maybe you create digital designs, or code apps, or make pottery. Perhaps you’re a writer, or a musician. Heck, maybe you sculpt balloon animals. Regardless of the field in which you wield your exceptional talent, undoubtedly you can think of a few instances in which you had a great idea to leverage your many gifts: a startup idea, a YouTube channel, a perfect balloon twisting formation to capture a flowing, unicorn mane.

Think back on some of those fantastic, industry disruptive ideas you have had. Take a moment to marvel at your marked innovation. Ah, yes. You are quite brilliant.

Don’t fret. There’s a great book about this very problem called Just F*cking Ship, by Amy Hoy. Amy is a tech industry vet who over the years has finessed the process and psychology behind delivering a product, finished or not. That’s why she decided to take a 24 hour challenge to write, edit, and sell a book about shipping in one day (AND she got a full night’s rest). I spoke to her and her business partner Alex Hillman about why we as creators are afraid to ship, how Trello aids in this process, and tips for hosting a great dinner party, to name a few.

Why Don’t We Ever Just Ship?

We all have either been there or know someone that’s been there: stuck in a rut of a half finished project, hell bent on customizing every last piece, meanwhile the project eventually gets set aside for something else entirely. The broken code remains in limbo for eternity, left to die in a forgotten folder on your machine, never seen by those who would actually relish in all your sage wisdom and perfectly rounded corners.

Too often people get absorbed in the creation process and fear transitioning into a phase where the product is now in someone else’s hands. “We’re makers so we think that we should make things,” Amy explains. “But if your goal is to help someone or reach a customer or make a sale, then it’s not that you’re making things, it’s that you’re achieving a result.”

To Amy, the self sabotaging that leads to delays in a final product stem from a threat to one’s identity. In the theory of fixed vs. growth mindset, people with a fixed mindset believe that their intelligence or talent is innate, and that it doesn’t evolve over time. This mindset is a huge deterrent from taking risks and challenging oneself because the potential for failure is perceived as a threat to one’s own identity.

For people with a fixed mindset, the fear of not shipping is rooted in thoughts of self doubt. “Otherwise, writing a book and no one buying a copy wouldn’t be scary because it would just mean you didn’t make any money. It’s not actually a loss,” Amy explains, “but if you have a fixed mindset, what it is saying to you is ‘I’m not as smart as I thought I was’ and you have to live with that perception forever.”

So, why don’t we ship? The short answer is that it’s all in our head.

Amy and Alex use Trello for all kinds of initiatives: from her office redesign project to his Philadelphia co-working space, Indy Hall. Thus, using Trello to write and ship a book in 24 hours was a natural fit. Essentially, Amy took all of the topics she wanted to cover and dumped them into a list. Eventually, as these ideas were finessed they funneled into the next list over, which became each chapter. These chapters then progressed through a traditional book publishing pipeline: 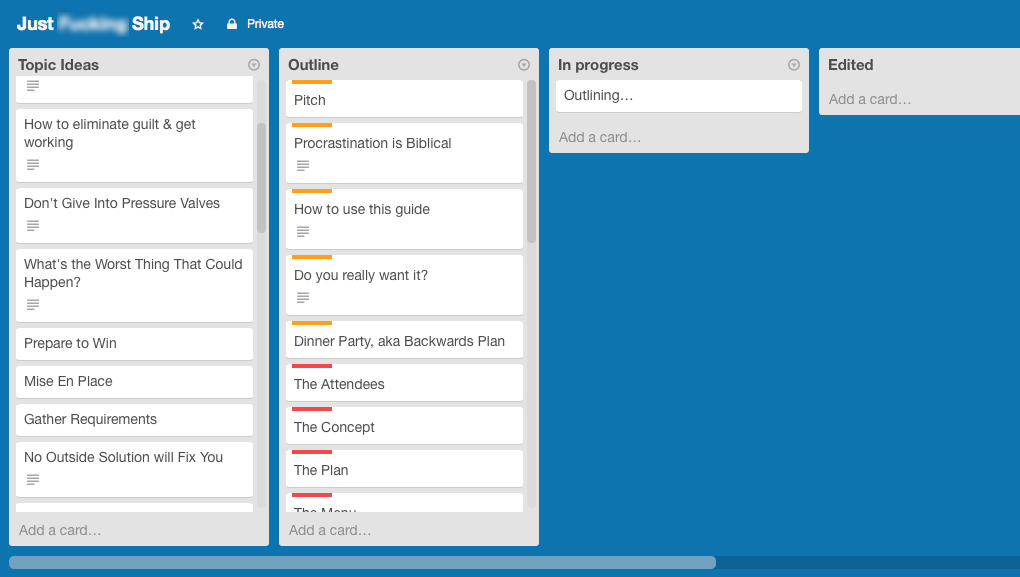 Amy then powered through each chapter individually, using her own product, Freckle time tracker to monitor how much time she spent on each part. So essentially it became an organized system: go to Trello and move the card, start the timer, write, stop the timer, then rinse and repeat.

Using Trello and Freckle together transformed the process of organizing and documenting from an arduous task to a process that is actually fun and enjoyable. She was able to collect data on each part, which later helped her in analyzing the cost benefit analysis of the project.

Since Amy broke down each chapter of Just F*cking Ship in Trello and tracked all of the time she spent on each section by using Freckle, she could actually calculate its ROI per hour based on profits made from the book. 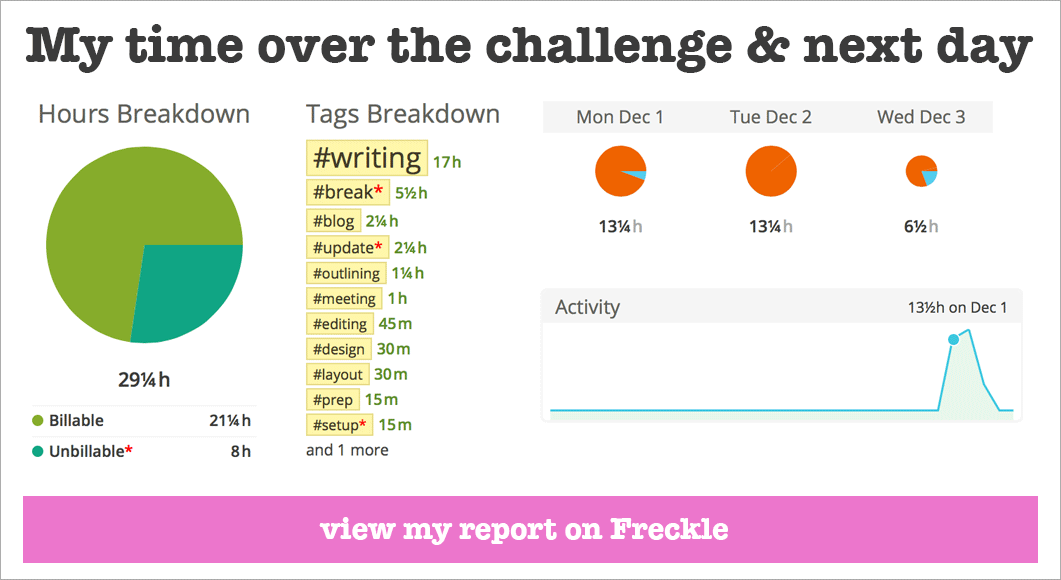 Even though she concerns herself with the numbers, Amy uses it primarily to compare herself to her own previous milestones. She pays little attention to industry standards and doesn’t concern herself with other people’s suggestions on what the data should say.

“Analytics are an excellent servant and a terrible master,” she asserts. “I suppose if you look at the first product or sales numbers it can look like a failure, but in the end it turns out to be a success because you had a different metric: you wanted to get it out there and in someone’s hands.”

Amy's ROI 6 days after putting the first iteration of her book up for sale.

What Amy sought to do in 24 hours was essentially ship a minimum viable product and get it into the hands of people for whom the book could benefit as soon as possible. This meant she was conscious to divvy up tasks into “niceties” vs “necessities,” and it also meant that certain things like a thought-out layout, and even bonus chapters were not released until later versions.

Two weeks after her first publish, she shipped a content complete book. Her plan is to continue to iterate, and moving forward she will be providing supplemental materials like interactive graphs and Trello workflows to underline her points. In the meantime, however, she is still making money off the book. That is the power of shipping.

Just F*cking Ship reads like a self help, professional motivation tool that is designed to give productivity a Haymaker. All creators get hung up on similar aspects of the process: the desire to build and customize every piece of a project, overwhelming oneself with a broad topic, and of course the crippling anxiety of self doubt. All of which, Amy argues, distract from actually putting forth a finished result and providing value to the audience. A project’s elements can be finessed and perfected ad nauseum, but it’s worthless if it’s not in the hands of someone who can use it.

Do yourself a favor and read this book, then get out there and get ship done.

Special thank you to Amy Hoy for sharing her philosophies on life, book publishing, the great city of Philadelphia, and most of all for sending me unicorn pictures.

21+ Questions Every Manager Should Ask Their Employees

Productivity Styles And Why They Matter For You And Your Team

How To Master Your Goals With The Ulysses Pact

Struggling to achieve your long-term goals? Banish procrastination once and for all by holding yourself accountable with the Ulysses pact.