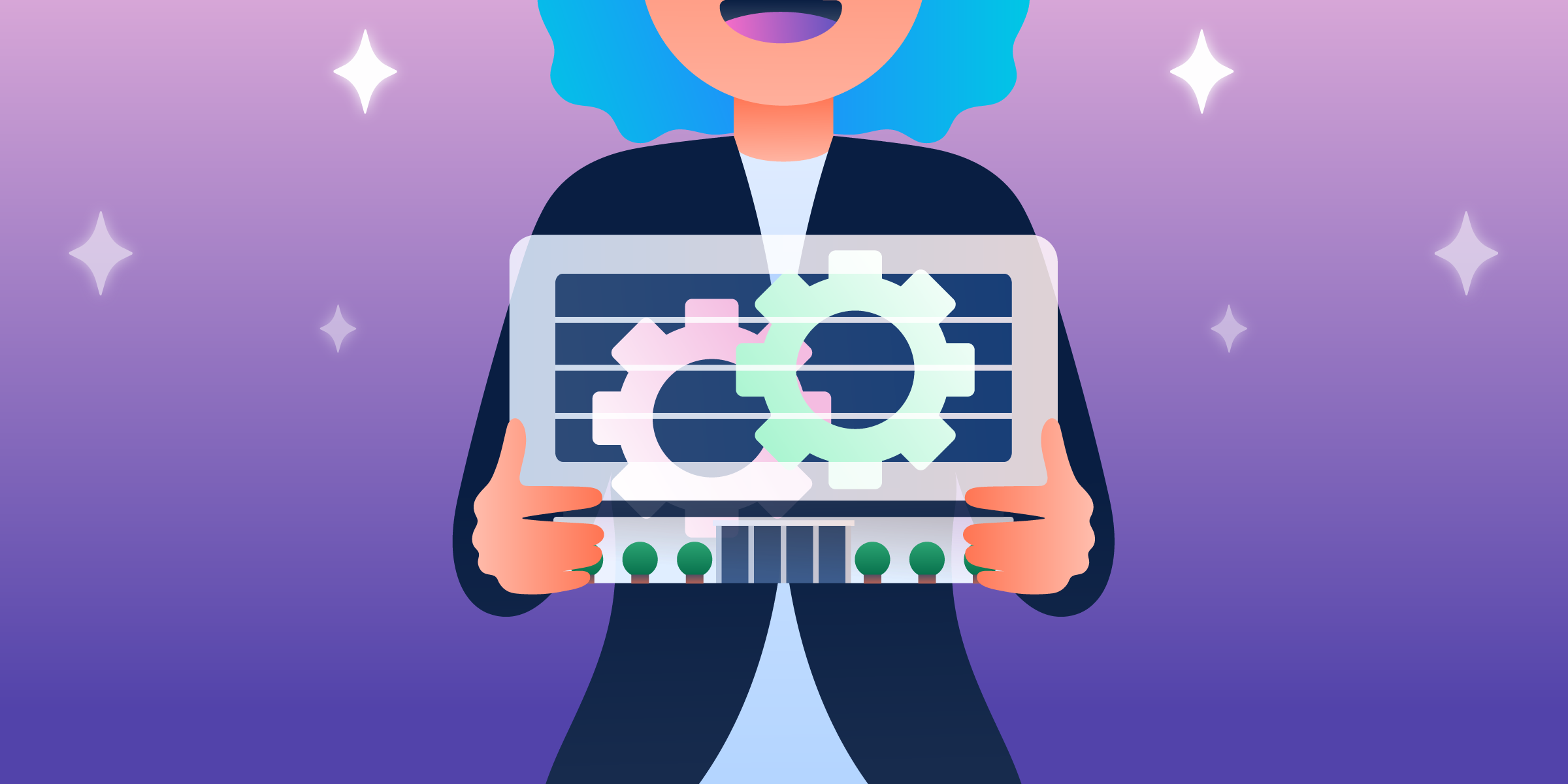 We’re living in a more transparent world than ever before. Thanks to smartphones, social media, and the internet, constant real-time communication is now the norm. For better or worse, we pretty much always know what's going on with our friends, family, and colleagues.

It’s debatable whether having 24/7 access to pictures of your cousin’s cat is a good thing. But this open flow of information has had another positive side effect—it’s much more difficult for companies to operate in a closed, authoritative way.

Logistically, it’s hard to keep people in the dark when everyone’s walking around with tiny supercomputers all the time. But in our new culture of communication, it doesn’t really make sense to even try.

Millennial and Gen-Z workers have grown up with free, immediate access to the answers they want. If they see their employers clinging to dated, bureaucratic management styles, they won’t stick around—and if they do, they certainly won’t do their best work. That’s why leaders need to embrace transparency, and trust their people with all the important news and information that could affect their jobs.

In short, transparency isn’t a radical new idea. It’s simply how the world works now, and organizations need to keep up. Here’s what organizational transparency really means, why it’s important, and how modern leaders can put it into practice.

What Is Organizational Transparency?

Transparency sounds like a great idea, but what exactly does it look like in an organizational context? Does everyone at your company need to be looped in on every single meeting, decision, and conversation? Absolutely not—that sounds like a nightmare!

Transparency isn’t about inundating people with the mundane, daily minutiae of what’s going on at your company. Rather, it’s about keeping people aware of the big stuff — building a culture around a shared sense of purpose and inclusion.

As an organization, what are you working towards, and why? What does your company stand for, and care about? Are there any big, career-shifting changes on the horizon?

Sharing this knowledge with your workers might sound like common sense, but this kind of transparency really isn’t present at most organizations. In one survey, less than half of respondents felt they’d been given a clear understanding of their organization’s mission, vision, and values.

In the past, the dominant management philosophy was to provide information on a need-to-know basis only. The idea was to keep decision-making and strategic planning behind closed doors, in order to avoid distracting people from their daily tasks.

But today, times have changed. Workers expect their employers to take a direct, honest, and open approach to communication. It doesn’t feel good to find out about big news like mergers or downsizing after the fact. People want to be kept in the loop as big decisions are being made that affect their livelihoods, or better yet, share their input and see that it’s truly listened to.

Gone are the days when workers were siloed into different departments, taking orders without question from mysterious, faceless ‘upper management.’ Not only does that sound super creepy, but it’s not good business sense!

Why Should Leaders Embrace Organizational Transparency?

When leaders fail to embrace transparency, they don’t stop sensitive information from getting out. They just lose control of how it happens, and the narrative that’s created around it.

If they take a proactive approach to sharing information even when it’s scary or uncomfortable, leaders have an opportunity to own the narrative from the start. Transparency means people won’t feel like cogs in the machine, guessing at what’s really going on behind closed doors. Instead, they’ll feel like integral, valuable parts of their workplace. That’s incredibly important when they’re sharing so much time, labour, and energy with their organization.

Don’t just take our word for it—research has shown transparency to be the single most influential factor in determining employee happiness. And really, that shouldn’t be surprising. Workplaces are composed of people, and the relationships between them. It turns out that relationships built on a foundation of respect and honesty tend to be much happier, healthier, and more fulfilling. Wow, who would have guessed?

How To Put Organizational Transparency Into Practice

Transparency is all about creating workplaces where people trust each other, their leaders, and their managers. In that context, people are more comfortable, more collaborative, and ready to do their best work. Let’s take a look at how transparency can be put into action.

Be Transparent At All Levels

For your organization to be truly transparent, communication needs to happen in an honest, open way at all levels—and that starts with leadership. If those with the most power and responsibility aren’t conducting themselves with transparency, it doesn’t matter how committed the rest of your team is—it’s simply not going to work.

But if leaders are willing to set an example and embrace transparency beyond surface-level words and gestures, it’ll pay off for your workplace in real, tangible ways. For example, one study found that embracing pay transparency boosted productivity in a measurable, long-lasting way, despite costing nothing to implement.

Transparency goes both ways. It’s not just about how you share big news with your people—it’s about how you listen to their ideas, questions, and concerns.

Establish clear processes for responding to these queries, both typical day-to-day questions and bigger, more serious ones. For example, you could set up a separate Slack channel specifically for these questions, or designate weekly open-office hours with upper management.

It takes bravery to speak up, even for smaller questions. That’s why you should never let people feel that their questions are ignored or de-prioritized.  Even if you don’t have an answer yet, check in, let people know you’re hearing them, and give them a timeframe within which you’ll reply.

Transparency doesn’t mean every single development at your company needs to be made public. But it does mean avoiding secrecy, even around topics that you can’t totally reveal just yet.

Be straightforward with your people about new developments, even if they have to stay under wraps at first. For example, you could let people know the company’s in talks for a possible merger, but that you aren’t at liberty to discuss the specifics until things are more concrete.

Transparency means not shying away from bad news, uncomfortable conversations, and topics you know will be controversial. In fact, those are the scenarios where honesty and openness matter the most.

Get ahead of intimidating conversations by proactively sharing information. When they’re worried about layoffs, poor sales performance, or other scary topics, people only grow even more anxious and fearful in an information vacuum.

Instead, give people the facts. Show employees that you trust them and you’re all in it together by making sure everyone knows exactly what’s going on, even if it’s not what they were hoping to hear.

Remember those processes you set up, so people could voice their opinions? Those weren’t just a formality—transparency means paying attention to what they have to say, and if necessary, changing how you do things in response.

That feedback doesn’t need to be super negative, or even explicitly stated, to be important and valuable. Say you’ve noticed that people aren’t very active on your new dedicated Slack channel, but tend to be chatty and vocal in-office. Maybe that means your team prefers in-person dialogue to virtual, and you should design your future communication strategy with them around that!

Living In A Transparent World

‘Organizational transparency’ might sound like a lofty or idealistic goal, but it really just means being real with each other—following the same principles of healthy communication that we would in any other area of life.

If leaders are ready to facilitate the open, transparent flow of information within their organizations, they’ll be rewarded with workplaces that truly feel like a team. When people feel included, respected, and valued, they’re even more inclined to step up and give their best effort to everything they do.

There's an endless variety of ways to approach leadership—and no one is necessarily better than the other. The question is, how do you find a leadership model that feels like the right fit for you—and helps you drive results and inspire the best in your team?