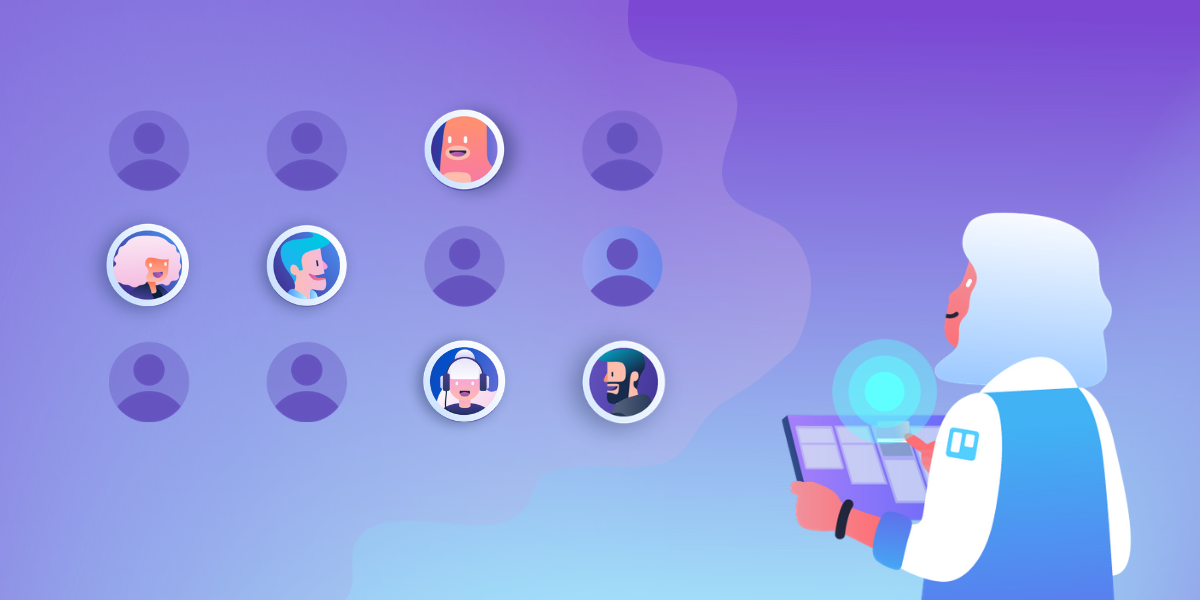 When a manager requests an update on a project and or to provide a progress report, your knee-jerk reaction might be to rattle off a huge list of very important, very exciting things that you've got in the works.

Let’s be real, though. While these tasks aren’t necessarily a complete fabrication, they’re also most likely not an accurate representation of what you’re truly spending your time doing. It’s natural to want to prove that your work is providing value to the company. But ask any manager, and they will tell you that instead of the twenty one-off tasks you have on your to-do list, what they really want is to get a gauge on the most important ones.

As Michael Pryor, Co-Founder of Trello, says, “You don’t need to prove to me that you’re busy. I know you’re busy.”

The argument is a classic quality over quantity sentiment: if you’re working on a million tasks, are you really doing any of them effectively?

As a manager, instead of receiving a laundry list of tasks from your team when asking for updates, learn how to use the Rule of 5 to limit each employee's updates to be efficient and focused.

Joel Spolsky, Co-Founder of Trello, oversaw a team at his software company Glitch (formerly Fog Creek). He was able to see all the various items assigned to each person, but he had no way to tell which ones were actively being worked on at any given time.

“A long list of a thousand individual tasks where everyone is going to take 25 of them doesn’t really add up to knowing what everyone is working on,” explains Joel.

The other dilemma is knowing whether the items employees are prioritizing are aligned with what Joel, as their manager, thinks they should be prioritizing. “I think a lot of times people are working on a long list of little things and don’t know what the company’s big priorities are either,” he says.

When he dug in deeper, he saw that his employees were mixing up short and longer-term objectives, and urgent priorities with superficial items, but never truly explaining what they were actually working on. Most of these tasks were not directly in the forefront and did not reflect the work that was being done.

Gain Clarity With The Rule Of Five Method

Back then, Joel was already running Glitch and StackExchange at the same time, and he came to a point where he needed to quickly understand what was happening in his companies and what people were working on.

Conceptually, this turned into the Rule of Five idea—as he realized what he really wanted to hear from his team was a list of 5 things:

📝 Two tasks they were currently working on.

💭 Two tasks they planned to work on next.

❌ One that people might expect them to be working on, but they weren’t actually planning on doing.

He would then have only 5 items per person to check on. As a manager, he sought to gain a clear perspective of what was happening, and he thought a process like this would help his employees prioritize their work and truly accomplish something.

The brain can really only absorb and process a limited amount of information at once. One concept that all productivity methodologies agree on is that being productive means staying focused.

Prioritizing just two tasks at a time helps to drill down into the specifics of a given day or week.

“They can switch off between two major projects, but if they think they’re working on three things then there’s probably one that isn’t getting any major work done,” Joel insists.

Identifying the two tasks you are currently working on orients managers and team members to what your brain is currently dealing with. It will prevent them from asking you questions that are not related to your current focus.

Listing the two things you will be working on after you finish your current tasks is a way of creating a realistic roadmap of your work. It will help you and others assess what’s coming next and act accordingly. Trello makes it easy to list your two priorities and loop in your team members as well.

For example, if you're a lead developer and have listed that next week you will begin developing an amazing new feature, then the marketing team knows that they can start planning promotional materials.

Let’s say you’re on a large legal team reviewing contracts, and you list the two documents you plan to look at next. This makes it easy for your paralegals to prepare the correct materials, your other team members to know which contracts are already spoken for, and your supervisor to plan for which contracts are nearing completion.

Or maybe you’re a content manager mapping out your editorial calendar, and your photo editors need to know which articles’ graphics need to be touched up. All they would need to do is review your priority list.

By listing one task that you don’t plan to work on, but that people expect you to work on, you can clearly let your team know that it’s not happening. It can be for many reasons: lack of time, interest, or simply because you realized it wasn’t the right idea.

Listing the reason you're not working on the task will help people understand why this specific feature or article won’t go live soon. When expectations meet reality, it’s more satisfactory for everyone.

The Evolution Beyond The Rule Of Five

The idea behind ‘The Rule Of Five ‘became a way for Joel and his team to conceptually explore new ways to better manage teams.

What they realized is that ‘The Rule Of Five’ is just one method—the bigger picture involved a way to visually and flexibly view and update tasks and priorities (starting to sound familiar?).

Inevitably Joel’s team, recognizing the need for a more robust, clear solution to managing tasks, developed a little ol’ tool called Trello. It became an easy way for managers to coordinate responsibilities any way they saw fit, and helped them gain a better perspective on the status of everyone and every initiative on their team.

These days, Trello boards foster countless workflows, management styles, and (most importantly) fun backgrounds for all styles of leadership and teams. Customize your own Rule Of Five board to start better managing priorities and shedding light on your and your teams' workload. 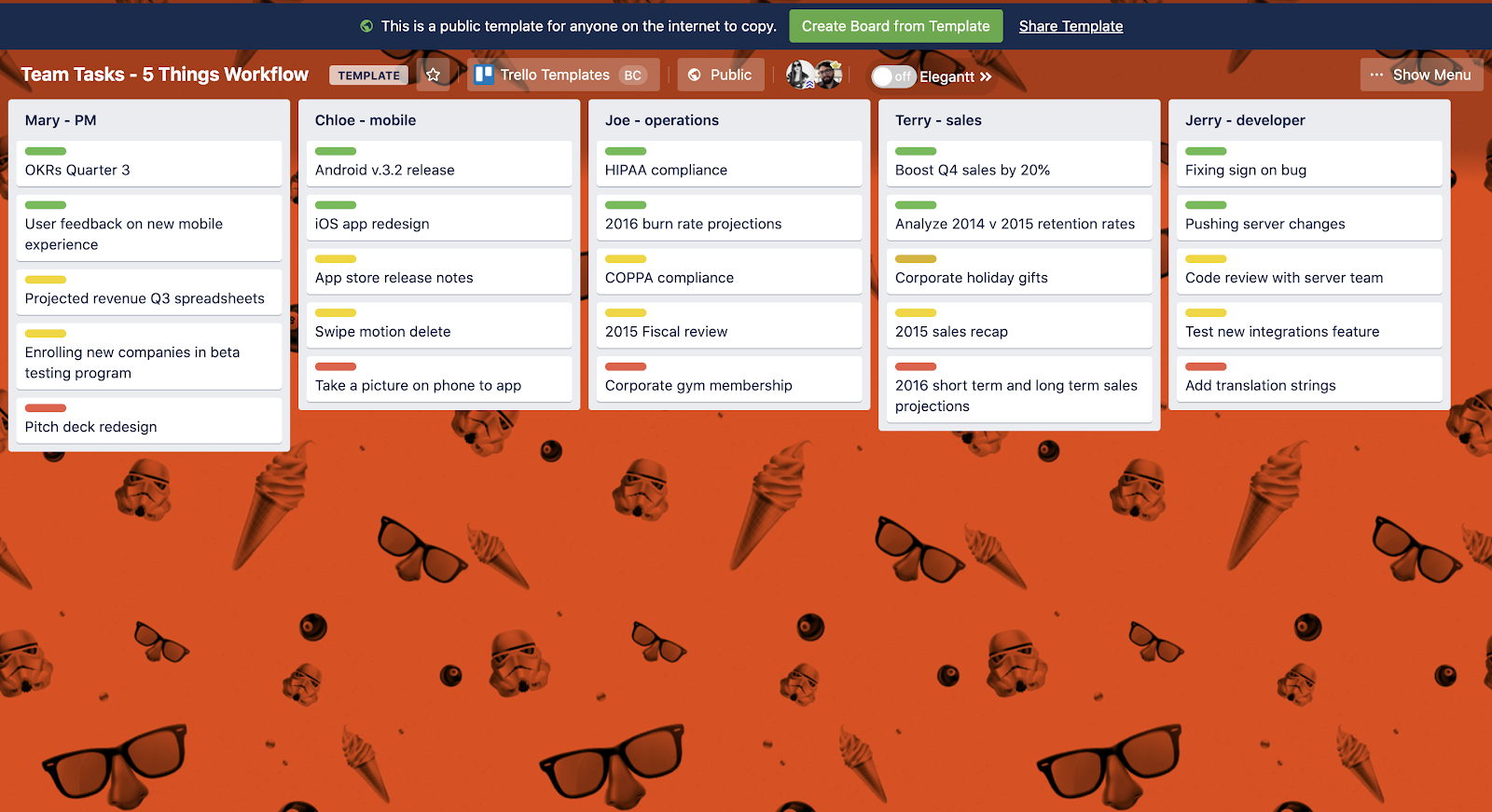 Editor's Note: This article was originally published a few years ago and we've added a whole heap of new ideas and nuggets of information to this post in October 2020.

Next: Stop Being Awkward: 6 Tips For Better Video Meetings