4 Easy Ways For Managers To Boost Their Team's Morale 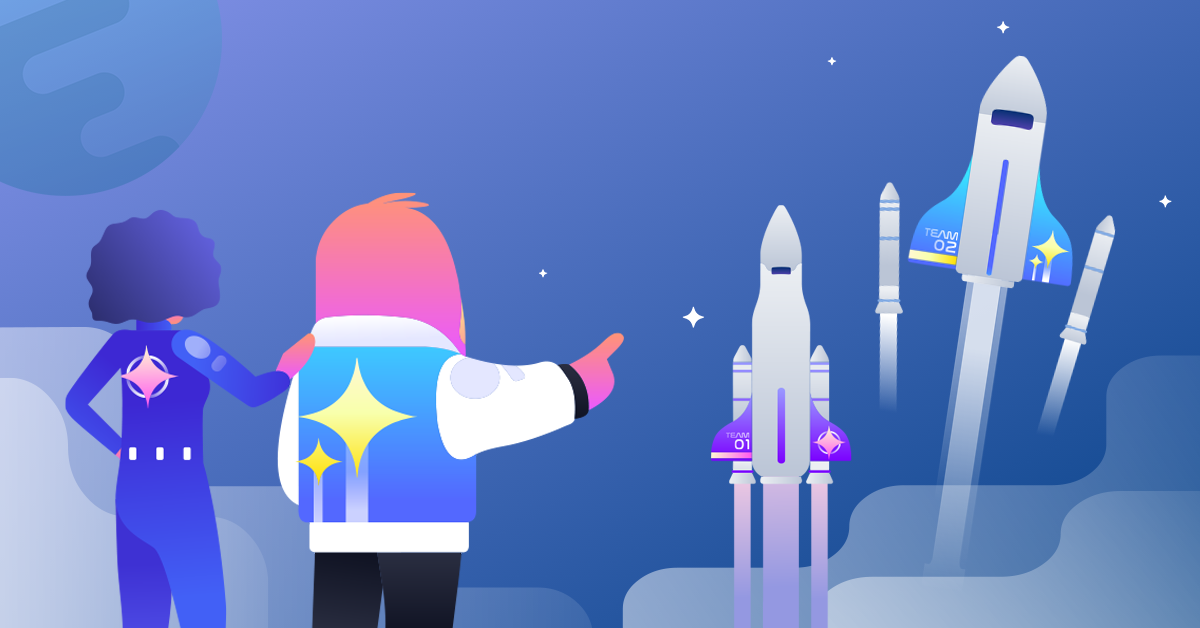 You want to inspire the best in your team. And the best way to do that? Keep their morale high.

When team morale is riding high, your employees are likely to be engaged and excited about their work. But when their morale takes a nosedive, the opposite is true; they’re likely to feel disengaged and unmotivated—and inspiring the best in your team? It’s going to be an uphill battle.

So, if you want your team to perform at their highest level (and enjoy themselves while doing it), you need to find ways to keep their morale boosted. But how do you do that? What are some ways managers can deliver a much-needed boost to team morale?

What Is Team Morale—And Why Is It So Important?

First things first. Before we jump into how to boost team morale, let’s quickly touch on what, exactly, morale is.

“Morale is the collective emotional temperature of a team,” says Monica Parker, founder of HATCH, a global change management company of organizational psychologists and social scientists focused on making work life better. “It represents the attitude, confidence, and outlook of the team.”

And, depending on the level of your team’s morale, that emotional temperature can—and will—come across in very different ways.

When a team has high morale, they’ll typically be “eager, enthusiastic and want to take on whatever they can to help one-another and/or the business,” says JP Gaston, a leader with 20 years of experience managing teams and the co-founder, host, and producer of The Biz Dojo podcast. “Team calls will often include signs of camaraderie, laughing and joking with one another, [and] commendations for a job well done from peers.”

Essentially, teams with high team morale are positive, happy, and engaged with their work—and that engagement can pay off in a major way. According to Gallup’s most recent State of The American Workplace Report, businesses with highly engaged teams experience 21% higher profitability, 17% higher productivity, 10%higher customer satisfaction metrics, and 41% lower absenteeism than business with less engaged employees.

On the flip side, teams with low morale won’t have that same kind of enthusiasm about their work. In fact, they might seem downright gloomy. “You may see people looking stressed at work every day and repeating seemingly innocuous things that indicate stress and low morale…[like] I’m so tired’, ‘Is it Friday yet?’, or ‘I’m just trying to keep my head above water,’” says Josh Rovner, leader and author of Unbreak the System: Diagnosing and Curing the Ten Critical Flaws in Your Company.

According to Gaston, teams with low morale are also typically disengaged and show “minimal participation...whether that’s asking for overtime, to take on an additional project, or just looking for folks to raise hands to answer a question. “In today’s [primarily remote] environment, this can sometimes also be indicated by cameras and microphones being turned off on video meetings.”

Low morale can also translate to performance issues. “In the majority of cases, leaders would see morale issues seep into their stats,” says Gaston. “This is usually a ‘slow burn’—where performance stats gradually, but consistently, fall off over time.”

In a nutshell, when morale is high, teams are more engaged, more productive, and happier at work—which translates to better outcomes for the team, the manager, and the business overall. And when team morale is low? Well, employees just aren’t too excited to be at work—and both they and the business suffer as a result.

“High morale allows teams to focus on doing their job in the best possible way without the distraction of worrying about their own happiness,” says Rovner. “If a team is distracted by low morale, they will be much less productive—and performance will suffer—because the time and mental energy that they should spend on solving problems, innovating, making things better, and being productive will instead be spent on dealing with internal issues or ‘wallowing’ in the low morale itself.”

What Causes Low Morale On Teams?

Low morale can sink a team and, as a manager, it’s your job to identify any morale drains and deal with them swiftly and effectively.

“The three top reasons for morale drops are stress from overwork, feeling undervalued, and management’s failure to deal with toxic individuals,” says Parker.

So, if your team is working ‘round the clock without as much as a “thanks” from leadership—or they’re stuck working on a project with a truly toxic coworker, expect team morale to take a serious nosedive. In fact, according to data from Officevibe, 69% of employees say they would work harder if they felt their efforts were better recognized.

Micromanaging can also cause your team morale to plummet—even if well-intended. “More often than not, managers are transitioned into their role as a leader from one of an individual contributor,” says Gaston. “Many new leaders struggle to let go of the control they once had over their level of performance, and end up micro-managing tasks within the team. This creates issues of trust between the leader and team members, which very quickly disrupts morale.”

Bring People On Board That Will Boost Morale

You can take all the right steps to keep team morale high—but if you have negative, toxic people on your team, they’re going to bring everyone down.

That’s why, if you want to keep your team morale at a high level, you have to stack your team with people that are going to contribute to that high morale—and that starts with who you hire.

“Make sure that you not only foster an environment of positivity and gratitude within your team, but that you consider more than skills or education of [new] team members when you bring them on board,” says Gaston. Because teaching someone the ins and outs of the role is “far easier than teaching them to have a positive, caring, and collaborative attitude they bring to work every day.”

Recognize Your Team And Celebrate The Wins

As mentioned, feeling unrecognized and unappreciated is a recipe for low team morale. So, if you want to give your team a morale boost, make sure you’re recognizing—and celebrating—their hard work, achievements, and wins.

“Recognition is important to fostering a team environment and driving morale,” says Gaston. “Even just a thank-you can go a long way.”

And while recognizing your team and celebrating their wins is always important, giving your team props “ needs more focus when teams are working remotely,” says Parker—when they may feel disconnected from the company and team as a whole.

Open up your weekly team meeting by recognizing something each team member has contributed or done well over the past week. Throw a virtual happy hour to celebrate wrapping up a big project and, if you have the budget, give each team member a small gift (like a gift card to their favorite coffee spot) to thank them for all their hard work in getting things done. When you schedule one-on-one time with an employee, make sure you come prepared to celebrate the ways they’re knocking it out of the park for the team.

The bottom line? A little recognition goes a long way when it comes to boosting morale—so, if you want to keep morale high, make sure you’re giving your team the recognition and appreciation they deserve at every opportunity.

Resist The Urge To Micromanage

As a manager, you might think it’s your job to control how and when your team does their jobs. But, as mentioned earlier, there are few things that will bring morale crashing down as quickly as micromanaging your team.

“If you bind the hands of your employees by trying to control how they do their jobs, you will never get to a place where your team reaches their potential—morale or otherwise,” says Gaston.

You hired your team because you believed in their ability to do their jobs—and to do them well. So, if you want to keep morale high, give them the space to do that.

“Individuals who are given time, space, and trust to accomplish their tasks on their own with little involvement from leaders are significantly more successful, and morale improves across the board,” says Gaston.

Ask What Your Team Needs To Boost Morale

Every team is different—and, as such, the best way to boost morale is going to differ from team to team. So, if you really want to know how to give your team the morale boost they need to feel happy, engaged, and successful at work? Just ask.

“One of the easiest ways to understand the team’s morale is to regularly ask your employees four questions,” says Rovner. “What is it that we do that sucks? What do I not know that I need to know? How are you feeling? What can I do to help?”

Then (and this is the important part!), listen to your team’s answers and follow through on any feedback that they deliver.

For example, if a team member tells you they’re feeling stressed because they have too many conflicting deadlines, make an effort to take a few tasks off their plate—and then let them know you removed those tasks to get them some breathing room.

Or if, in a team meeting, your team gives you collective feedback that they’re feeling disconnected while working remotely, schedule more one-on-one’s and a weekly virtual get-together to help everyone connect on a more personal level—and follow up after the first meeting to see if it’s fostering the sense of connection they need.

The point is, every team—and team member—will need different things to up their morale. So, if you want to deliver an effective boost to your team’s morale, ask them what they need specifically and then follow through and deliver.

When morale is high, teams are more engaged, satisfied, and productive at work. And now that you know exactly how to bring up your team’s morale, all that’s left to do? Get out there and deliver that morale boost—and watch your team thrive as a result.

The Benefits Of Team Reflections And How To Lead One

Discover the importance of team reflections and how to use them to create a brighter future for your team.