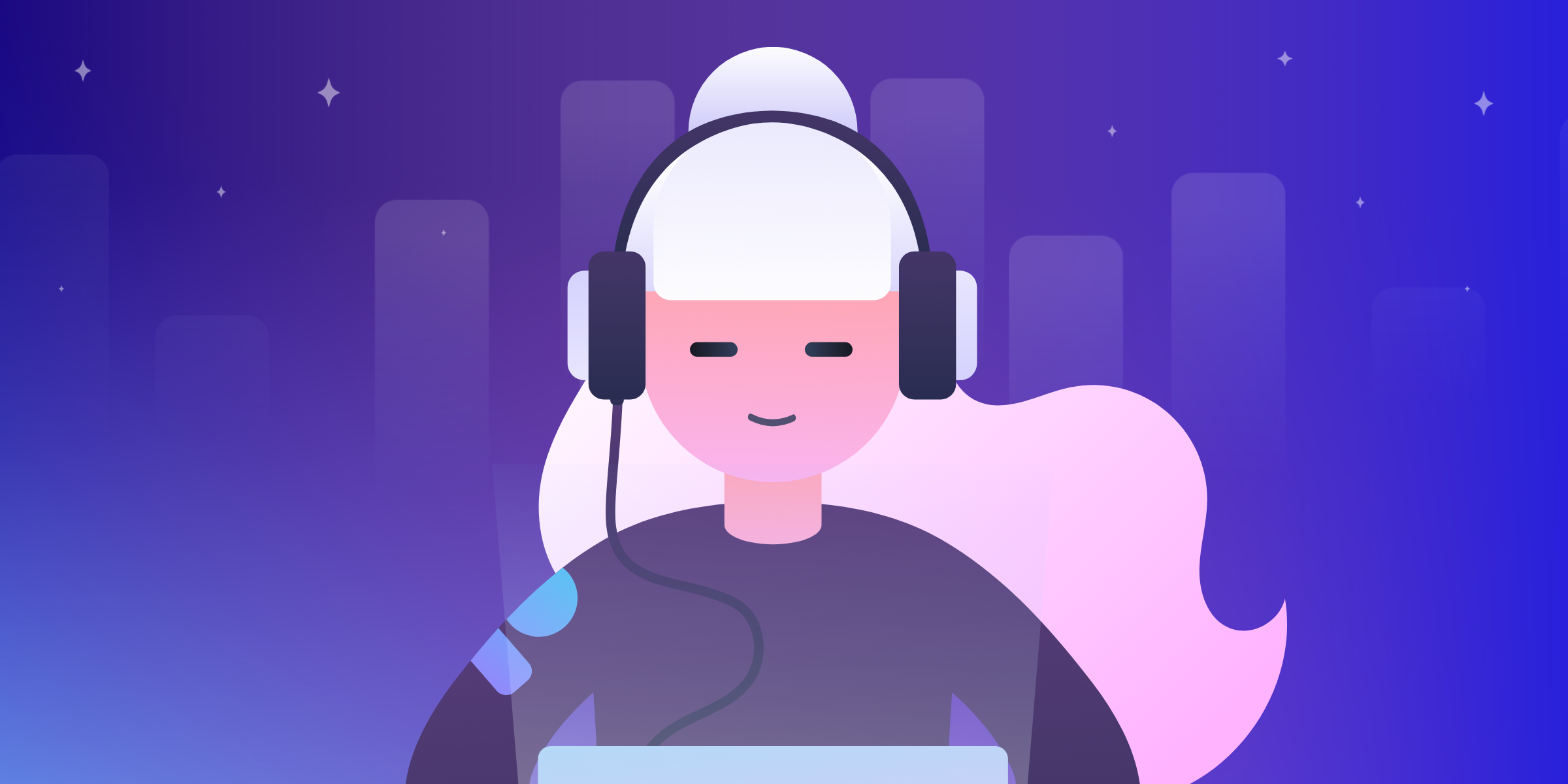 To get to the bottom of this deep work dilemma, I pored over the research on which sounds are best for productivity, busting through myths and curating the best tracks for each genre. So fire up your laptop and plug in your headphones as we find your next favorite productivity playlist.

Research And Productivity Playlists By Genre

Maybe you’ve seen the countless “Mozart for babies” CDs claiming to make your newborn a genius. What’s with that? It’s known as the “Mozart effect,” a term that took off during the 90s thanks to a single study published in the Nature journal in 1993.

In the research paper “Music and spatial task performance,” Frances Rauscher, Gordon Shaw, and Catherine Ky reported modest findings from their experiment with 39 college students: After listening to a Mozart sonata (K.448) for 10 minutes, the students scored significantly higher on spatial tests (they were asked to look at folded-up pieces of paper and guess how they’d look when unfolded). The effect—which the study authors did not call the “Mozart effect”—lasted 10 to 15 minutes.

These findings triggered a slew of inflated claims about Mozart’s music’s ability to increase intelligence. And while that’s a bit of a stretch, subsequent related studies do appear to show some promise.

For instance, a 2001 review of the literature found supporting evidence that listening to music by Mozart can improve short-term spatial-temporal reasoning, but not general intelligence. The researchers concluded that "an enhancement of spatial-temporal reasoning performance after listening to Mozart's music for 10 minutes has been reported by several, but not all, researchers." Further, patients with epilepsy have been shown to benefit from listening to Mozart's K.448.

Mozart may not make you a genius, but it’s worth trying his genre of music next time you want to boost brainpower:

If classical music isn’t your jam, tap into the power of the coffee shop effect. While the visual novelty that cafe-hopping provides can boost productivity, some research suggests the gains also have to do with sound.

How? Through a process known as stochastic resonance, a certain level of background noise can enhance performance—but at too loud of a level, it can decrease it.

A 2012 study published in the Journal of Consumer Research found that a medium-level of ambient noise from a roadside restaurant improved creativity, but low or high levels of it decreased it. The study authors note:

“Our ﬁndings imply that instead of burying oneself in a quiet room trying to ﬁgure out a solution, walking out of one’s comfort zone and getting into a relatively noisy environment (such as a cafe) may trigger the brain to think abstractly, and thus generate creative ideas.”

The right levels and types of sound vary widely depending on the person, but it could be the reason you find that background hum of chatter and clanging cups at a cafe so enticing.

Ready to find your happy medium? Give each of these coffee shop playlists a shot!

The relaxing beats and soothing tones of instrumental ambient music make it a favorite pick for people who need to focus. In a 2021 Spotify survey of 4,000 adults in the U.S. and UK, 69% of respondents chose ambient music as the best for studying, with 67% saying that the key ingredient is the slower beats.

At the time of writing, these are the three most popular ambient music playlists in the Spotify Focus Hub:

Much of the research on the benefits of upbeat music centers around exercise. A 2020 study published in Frontiers in Psychology found that listening to high-tempo music (170-190 bpm) made exercise feel easier, and therefore, boosted performance.

Additionally, a 2003 study presented at an annual meeting of the American Association of Cardiovascular and Pulmonary Rehabilitation found that listening to upbeat music while pedaling on a stationary bike boosted participants' exercise intensity; the faster the music, the faster they pedaled.

Could these findings from the exercise realm transfer over to desk-related tasks? Only one way to find out!

Few of us are able to go forest-bathing in the middle of our workday. But thankfully, merely listening to recordings of birds chirping and leaves rustling might be enough to soothe frayed nerves so we can dive into deep work.

A 2015 study by the Acoustical Society of America found that the sound of a flowing mountain stream boosted mood and productivity in workers in an open-plan office. The sample size was small, however, with only 12 participants.

Further, a 2017 study by the University of Sussex found that nature sounds can help you relax if you’re highly stressed. Interestingly, for participants who were already relaxed, listening to nature sounds actually increased their stress levels. So maybe skip these playlists if you already feel calm!

Noise colors refer to the power spectrum in a sound. White noise, for instance, plays all the frequencies at once at equal power, and it can sound more high-pitched than pink noise. Both noise colors may be beneficial for memory.

In a 2017 study published in Scientific Reports, participants who had listened to white noise while learning new words had better recall than those who had learned the new words in silence. The researchers concluded that white noise might enhance the ability to acquire new words.

Pink noise has been shown to have memory-enhancing benefits, too. In a study published in Frontiers in Human Neuroscience, older adults who listened to pink noise while sleeping showed better word recall in post-testing.

According to psychiatrist Dr. Suruchi Chandra, administering pink noise via transcranial brain stimulation has shown promising results for her patients.

“Many of our patients have experienced improvements in several areas, including mood, motivation, focus, sleep, and brain fog,” Dr. Chandra writes on her blog. “Patients have often described a lifting of their mood and feeling happier and lighter, generally after the first 4-5 sessions of pink noise brain stimulation.”

Keep in mind that the pink noise Dr. Chandra writes about was delivered via electrodes placed on a person’s head. While you may not have access to that specific kind of therapy, giving pink noise a listen on Spotify can’t hurt!

Since the term “deep work” was made popular by Cal Newport’s best-selling book of the same name, let’s find out his take on music’s effect on concentration.

“What I’ve learned is you have to train or habituate yourself to whatever the music type is,” Newport said in an interview with Author Hour. As an example, Newport spoke of an author who wrote a million words in one year while listening to, of all things, Metallica.

“I’ve found this again and again,” Newport continued, “people habituate the different types of music, and then the actual content of the music doesn’t really matter. It’s the ritual they built up.”

In the same vein, music (especially a specific song, playlist, or genre) can serve as a cue that triggers a habit. As described by James Clear, a habit loop consists of:

Like Pavlov’s dogs, we can train ourselves to react in a desired way to a specific cue (in Pavlov’s dog’s case, the mere sound of a bell was enough to make them salivate in expectation of food). So, in the same way that a dinging sound prompts you to check your iPhone or lying down in bed makes you feel sleepy, a song or playlist that you consistently work to may prompt you to “get in the zone” and be productive.

Productivity Music: It’s In The Ear Of The Beholder

Sorry, but there’s no magic playlist that’ll turn you into a productivity machine. Regardless, surveys show that people, by and large, enjoy listening to music while working. An Accountemps survey found that 71% of professionals believe they're more productive when music is playing at the office, and in the Spotify survey mentioned earlier, respondents named audio as the number one productivity booster.

So while scientific research is rife with conflicting studies about productivity-boosting audio, one thing is clear: Whether it’s Mozart, Metallica, or some mix of your own making—if it works for you, play it!

The urge to check digital devices is natural and will most likely always be there, which is why finding ways to successfully ditch those distractions is so crucial—now more than ever.

Effective energy management can—and should—be applied to every aspect of your life, including, and perhaps most importantly, your work.