Imagine moving into a cramped apartment with your coworkers, where you will live and work in an unpredictable environment for an undetermined period of time.

You might think the idea sounds far-fetched, but for astronauts aboard the space station and sailors on submarines, it’s a core part of their job responsibilities.  In today’s pandemic-affected world, it bears some resemblance to what many workers are experiencing: We’ve been thrust into unfamiliar territory with no guarantee of when it will end—and we’re still expected to get our work done.

So how do astronauts and submariners remain calm and get along with their team, all while dealing with the uncertainty of the upcoming weeks or months? The secret lies in their routines.

Why You Need Team Routines When Things Are Uncertain

If you’re feeling out of your element right now, you’re not alone. Here’s what land-dwelling teams can learn from astronauts and sailors about the importance of team routines in the face of uncertainty.

Routines Restore A Sense Of Control

When dealing with risk and uncertainty, it’s normal to find comfort in predictability and familiarity. That’s something that anthropology professor Dimitris Xygalatas’ research on rituals suggests.

In a lab experiment in 2015, Xygalatas and his colleagues found that inducing anxiety in study participants caused them to display more ritualized behaviors, which are characterized by:

Then, to test the role that ritual plays in anxiety reduction, the researchers conducted an experiment in Mauritius and asked local participants to prepare a natural disaster preparedness plan to be reviewed by experts. After this stress-inducing task, half the group was asked to perform a customary ritual at a local temple, while the other half was asked to relax in a non-ritual setting.

While both groups were stressed by the initial task, the group that did the ritual—which was something familiar to them—showed a greater reduction in signs of stress.

"The mechanism that we think is operating here is that ritual helps reduce anxiety by providing the brain with a sense of structure, regularity, and predictability,” Xygalatas writes.

This echoes the sentiments expressed by astronaut Tim Peake, who spent 186 days aboard the International Space Station.

“Habits and routine are so key to keeping everything under control in a confined and isolated situation,” he said, according to CNN. “That structure it gives you is vital; it's key to feel that in situations that feel out of control.”

Teamwork creates a lot of interdependencies. So when a coworker doesn’t do what you expected them to do at the appointed time, it creates roadblocks (and probably some resentment).

In the Navy, submariners traditionally worked 18-hour days divided into six-hour shifts. Imagine if a sailor decided to sleep in; that means the next sailor who’s been keeping watch would have no one to relieve him. And if the entire crew decided to work eight-hour shifts one day, the cooks’ custom of preparing meals at six-hour intervals would be thrown off. Adhering to a schedule is imperative to maintain the flow of the entire boat.

Team routines set an expectation for what your coworkers are doing at any given time, helping your team and organization run smoothly.

While it’s normal to respond to stressful situations by binge-watching Netflix or chowing down on junk food (guilty), research shows that under pressure, you’re just as likely to lean on your good habits as your bad ones. This is why establishing healthy habits in the first place is so crucial.

A University of Southern California study found that college students accustomed to eating healthy breakfasts ate particularly nutritious meals during the chaos of exam week. Similarly, gym-goers were even more likely to visit the gym when they were under pressure.

"So, the central question for behavior change efforts should be, how can you form healthy, productive habits?” said professor Wendy Wood, one of the study authors. “What we know about habit formation is that you want to make the behavior easy to perform, so that people repeat it often and it becomes part of their daily routine."

But what’s the difference between a habit and a routine?

Take an astronaut’s sleep schedule, for example. Because of the way the space station orbits Earth, astronauts see 16 sunsets per day. If they relied on their usual cue (i.e., the sunset) to know when it’s time to go to bed, or if they simply waited until they felt tired enough to sleep, their bodies would become confused and exhausted.

Instead, they rely on a routine of heading to bed at a scheduled time—regardless of the sun’s position or their own feelings of tiredness. This keeps them healthy, even as they grapple with all the stressors of living in space.

Have you ever decided to switch up your schedule and then felt “off” for the rest of the day? You’re in good company.

University of Wyoming professor Shawn McClean and his colleagues led a series of experiments to see how disruptions in routine affect productivity. They surveyed almost 400 employees every weekday for three weeks and found that even the slightest changes in routine, such as skipping a regular morning cup of coffee, could derail an entire workday (and it wasn’t because of the lack of caffeine). Participants whose routines were disrupted started their work feeling more mentally exhausted and less calm, and ended up being less productive overall.

“Because routines automate basic elements of daily life, they help conserve energy to dedicate toward achieving goals during the day,” the study authors write for the LSE Business Review. “But when a routine is disrupted, what was previously automated requires conscious thought.”

During times of crisis, your mind is already in overdrive assessing risks, solving problems, and forecasting situations. You have no brain space to spare! Routines protect you from depleting your energy on small decisions—such as when to hold a team meeting or who to delegate a task to—so you can save them for the big decisions.

Not only do routines keep you sane during stressful situations, but they also keep you close to your team.

Even amid the stress of working in close quarters and keeping an eye out for enemies, submariners take part in the time-honored tradition of Halfway Night, which celebrates the fact that they’re halfway through their mission. This ritual gives the crew something to look forward to and helps them bond.

To clarify, a ritual is a routine in that it’s a sequence of behaviors, but unlike a regular routine, rituals have a deeper meaning behind the actions. For instance, your team might establish a ritual of ringing a bell and cheering every time they win a new client.

“By aligning behavior and creating shared experiences, rituals forge a sense of belonging and common identity which transforms individuals into cohesive communities,” Xygalatas writes for The Conversation.

5 Healthy Team Routines To Establish Now (and How Trello Can Help!)

By now you know that routines have a lot to do with how well you’re able to forge on during tough times. Thankfully, it’s not too late to start building habits, workflows, and rituals that benefit your team. With its system of boards, lists, and cards, Trello can help your team create structure amid the chaos.

Below are some healthy team routines that can keep your coworkers calm and strong, plus tips on how you can build them with Trello.

Since habits are the building blocks of routines, here’s a nifty way to create habits with Trello. Make a habit tracker (we’ve even got a Trello template you can use!) by creating daily cards with checklists of habit-forming tasks you want to complete.

The more often you check off that daily behavior, the more likely the behavior will become automatic for you, thereby becoming an established part of your routine. 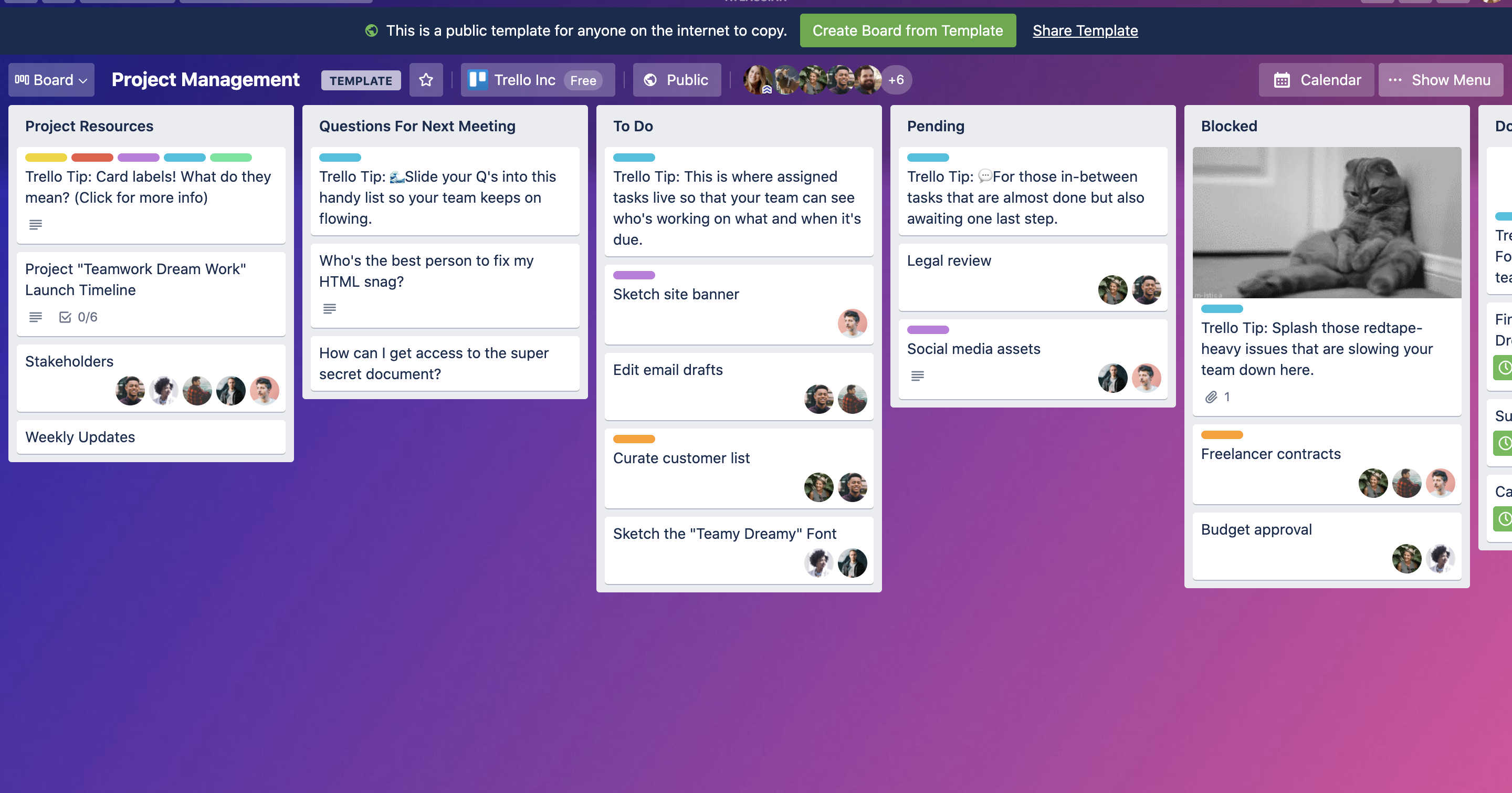 Here are a couple of features that’ll make it a hit:

Stay in sync by adding team members to cards: Remember, a huge benefit to team routines is that it empowers collaboration. To do this in Trello, add team members to cards so they know what to exact and can add agenda items to a meeting or jot down status updates for a project.

To build your weekly review ritual in Trello, create a recurring card called “Weekly Review.” On it, include a checklist of all the items you want to go over.

This reflective exercise allows you to make tweaks to your routine and provides the comfort of knowing what your schedule for the next week looks like.

Of maritime origin, “all hands” means every crewmember. That’s why all-hands meetings (also known as Town Halls) require attendance from every teammate. They’re a regularly scheduled time for you to check in with your team, celebrate milestones, and answer questions.

Using Trello, create a board for your all-hands meeting and lists for meeting minutes and questions. That way, your entire company can collaborate on the agenda and have a place to go if they want to reference what was covered during the meeting. 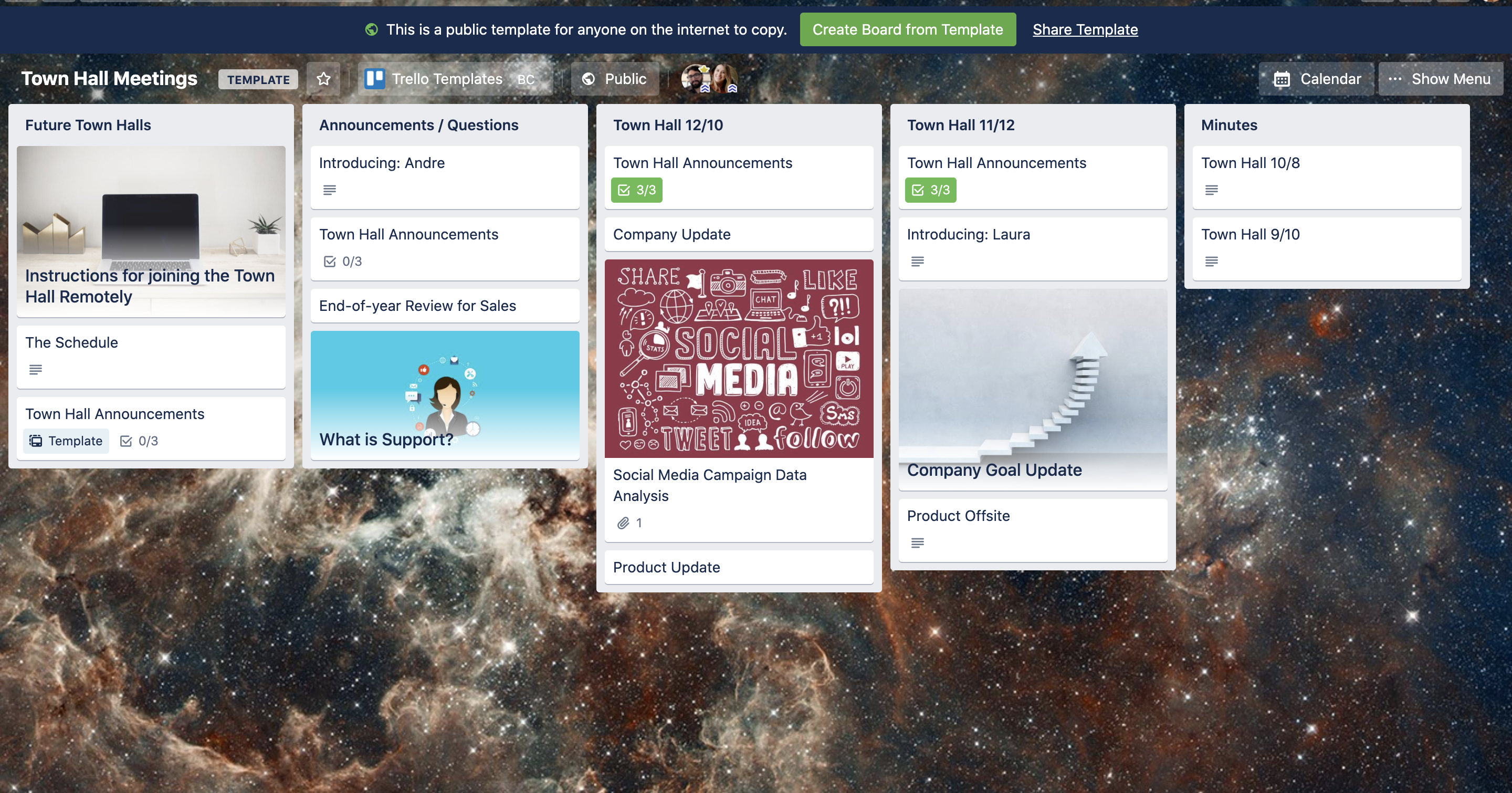 While stand-ups are an excellent routine for knowing what’s going on in your team, 1:1 meetings are helpful for checking in on an individual level.

Employees might experience anxiety before meeting with a manager for a 1:1 because they don’t know what to expect, and when they’re already grappling with uncertainty, that’s a lot to handle. By making 1:1s regular occurrences and using Trello, you can ensure there are no surprises. Use a 1:1 meeting board to create the agenda, keep track of discussion items, and trigger a reminder for the meetings.

When Things Feel Out of Control, Lean Into Team Routines

From the far reaches of space to the depths of the sea, uncertainty exists everywhere—even on work teams. And though you’ll probably never find yourself floating in zero gravity or keeping watch for enemy ships, there’s a vital work lesson you can learn from the people who do just that: Team routines can help you stay focused and resilient, even when the world outside looks nothing like it did before.