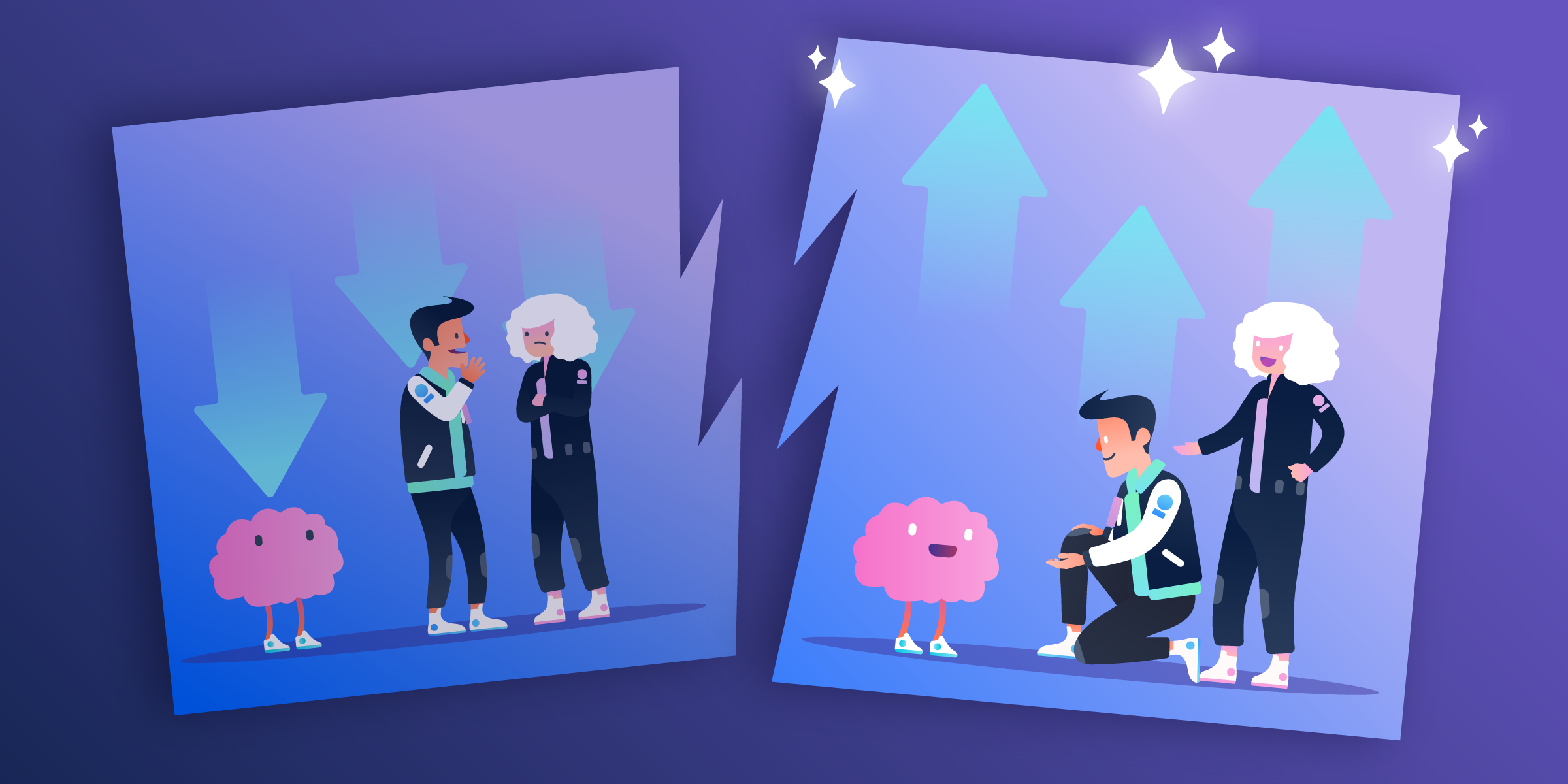 Hanlon’s Razor might sound like a hygiene device from Star Wars, but it’s got nothing to do with facial hair or the Millennium Falcon—we promise.

Instead, Hanlon’s Razor is all about minimizing our assumptions and seeing other people’s motives in a positive light. It’s a rule of thumb that we can use to think clearly and rationally, and it’s an especially valuable tool at work.

Everyone deserves to be treated with fairness and understanding, and if you can do that for the people on your team, it will pay off exponentially, not just in positive vibes, but in productivity and quality work. Because let’s face it—when you ask someone to describe their ideal work partner, terms like “paranoid” and “suspicious” aren’t likely to come to mind.

So let’s get into it—we’ll explain what Hanlon’s Razor is, why it’s so powerful, and how you can use it not just to see the best in your colleagues, but to be a better coworker yourself!

What Is Hanlon’s Razor?

Beneath its snappy name, Hanlon’s Razor is a simple principle that can guide our everyday interactions. Much like its cousin (and name inspiration) Occam’s Razor, Hanlon’s Razor can help us avoid unreasonable assumptions, build stronger relationships, and navigate the world in a more rational way—in the workplace or out of it.

“Never attribute to malice, that which is adequately explained by stupidity.”

But let’s broaden that definition a little. After all, we’re trying to build better teams here, and calling your coworkers dumb isn’t exactly a recipe for a supportive work environment.

Instead, we’ll use an expanded version of Hanlon’s Razor, written by management expert and author Douglas W. Hubbard for his book The Failure of Risk Management: Why it’s Broken and How to Fix It. Instead of blaming people’s actions on their stupidity, Hubbard states,

“Never attribute to malice or stupidity that which can be explained by moderately rational individuals following incentives in a complex system of interactions.”

This might sound convoluted, but it’s making a simple point—not only are people’s actions rarely malicious, they’re most likely not about you at all. Malice is simply not a probable explanation for people’s actions, and it’s not reasonable to assume it is. In fact, demonstrating ‘malicious intent’ is a major component of many legal cases—and proving it isn’t easy!

Hanlon’s Razor helps us look at other people’s actions through a more objective lens, and reminds us that people usually aren’t even thinking about us, let alone wickedly cackling as they scheme over evil plans.

To help us get a handle on Hanlon’s Razor, here are a few everyday examples from everyday life of situations where it could be applied.

“My friend hasn’t been liking my social media posts as much as usual.”

Flawed thinking: “I must have done something that made her angry.”

Hanlon’s Razor: “Maybe she’s on a digital detox for her mental health.”

“The mechanic didn’t give me as low of a rate as he usually does.”

Flawed thinking: “He must be trying to overcharge me, since I told him I don’t know much about cars.”

“My child’s teacher didn’t say hello when I dropped him off today.”

Flawed thinking: “What if she takes her bad mood out on my son?”

Hanlon’s Razor: “Maybe she’s tired, or getting over a cold.”

How Can Hanlon’s Razor Help Teams?

Applying Hanlon’s Razor at work is about giving people the benefit of the doubt. The importance of trust on teams is well-documented. Without it, it’s nearly impossible to collaborate, think boldly, and do great work. And the very definition of trust is the assumption that other people don’t wish you harm—that they have good intentions, and you’re working towards a common goal.

Basically, you’re not going to get much done if you think other people are plotting your demise. So don’t think that unless you have a good reason to (and if you do, run)!

One of the most powerful ways Hanlon’s Razor helps build trusting, supportive teams is by casting light on the biases that can distort interactions with other people. While there are many of these cognitive biases, confirmation bias and availability bias are two very common ones—and both cause us to make external events all about us without good reason.

Availability bias is the tendency to rely on information that’s readily available, instead of what’s actually more relevant to the situation. In the context of workplace relationships, this often leads us to connect other people’s behavior to ourselves, because those are the experiences that are already occupying our mental space.

On the other hand, confirmation bias is at play when you seek out information that fits in with how you already see the world. Confirmation bias can seriously harm your relationships, especially if you have any negative associations with your employer, workplace, or anyone on your team.

Hanlon’s Razor In Action (At Work)

Here are two theoretical situations where you might fall prey to emotional, biased thinking, and examples of how Hanlon’s Razor can step in and save the day.

“Jane didn’t show up for our scheduled Zoom meeting.”

Availability bias: “She’s trying to get back at me, because I couldn’t help her with that project last week.”

Hanlon’s Razor: “There could be a million reasons she didn’t show—another meeting came up, her notifications aren’t working, or her cat barfed on her iPhone.”

“My boss just emailed me asking to set up an urgent one-on-one meeting.”

Confirmation bias: “She’s got bad news. This is why I’ve been so anxious that I’ll lose my job.”

Hanlon’s Razor: “I have no specific reason to think she’s unhappy with my performance. Maybe she’s been handed a new project she can’t handle, and she needs my help.”

How To Apply Hanlon’s Razor

Thinking clearly, behaving rationally, and assuming the best of others sounds great—but how will you know when to use Hanlon’s Razor, or how best to apply it in practical situations?

Here are some hints that you might need to whip out Hanlon’s Razor, and tips on how you can use it to shave away your assumptions.

To figure out whether you need Hanlon’s Razor, pay attention to your own emotional state. If a manager or colleague acts in a way that gives you an emotional reaction, that could be a clue that you aren’t looking for the simplest explanation. Instead, you’re going off emotionally loaded personal experiences, simply because they’re fresh in your mind.

Once you’ve realized you need to cool down with Hanlon’s Razor, it’s time to rationally assess the situation. And that can be tricky, because sometimes, people do act maliciously—just because it isn’t likely doesn’t mean it’s impossible.

To get out of your head and see things more objectively, try asking yourself questions like these:

Assume The Best With Hanlon’s Razor

It’s natural to relate other people’s actions to yourself, and doing so doesn’t make you a bad person. But it’s in our ability to overcome these tendencies that we can grow, both as people and as team members.

That’s exactly why principles like Hanlon’s Razor are so powerful. We all want the skills to navigate upsetting situations, build more forgiving workplaces, and be happier, kinder, and more productive at work. But to get there, we need to get past our biases, think more compassionately, and be as supportive as we can of other people.

It’s not always easy to think this way. Our thoughts are powerful, and it’s easy to get caught up in the moment, not even realizing that you’ve lapsed into biased thought patterns. But rational thinking is a skill, and you can get better at it—and (kind of) like a Boy Scout’s Swiss Army knife, Hanlon’s Razor is a tool to help you along the way.

Life Can Get Messy: How To Clean Up Your Digital Space

Your digital organization can become chaotic when life gets busy. Here's how to start taking control of your digital space, one Trello list at a time.

Productivity Styles And Why They Matter For You And Your Team

Discover the the four different productivity styles, how to tell which one is yours, and how to use this knowledge to do your best work.